Hope has arrived for Housing in Birmingham, UK

When Beth, our Communications Manager at National CLT Network, came up with the Hope for Housing tagline for our conference last November, it felt like an aspiration. A desire to move on from the gloomy housing crisis and talk about our inspiring movement. Today, in Birmingham, hope has clearly arrived.

The Hope for Housing conference was organised by the Housing and Communities Research Network. It aimed to bring together academics, policy makers and practioners in community-led housing.

I kicked off the day with Isobel Wade from the Ministry of Housing, Communities and Local Government, and Matt Dodd from Homes England. We set a tone of possibility and optimism. Helpfully, the Government had launched the first phase of the Community Housing Fund the previous Monday. Wade and Dodd made clear that the Government doesn't see our sector as a flash in the pan. It wants to support us to grow, innovative and disrupt.

Here is Matt Dodd's slide on the Government's thinking for the Community Housing Fund... a handy crib sheet. 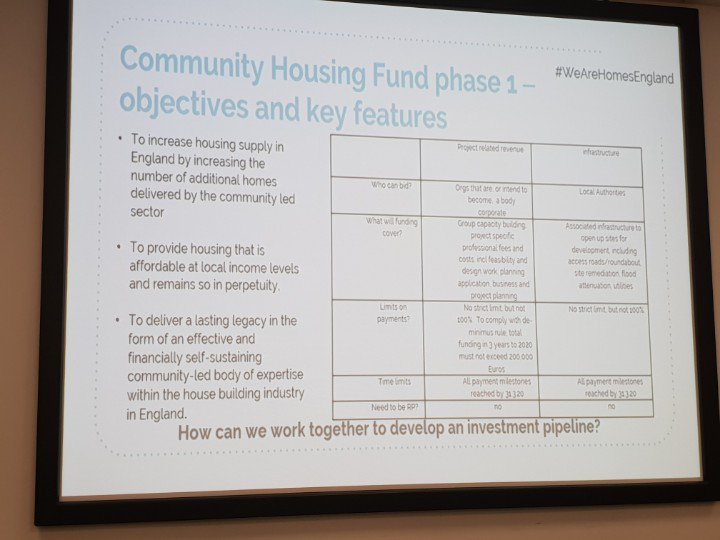 I talked about that growth that we've seen in the past five years and predict for the next five. The growth is increasingly diverse, with groups crossing the lines between "models" like CLTs and cohousing.

I also talked about our aim to create a self-sustaining sector that isn't totally dependent on grants. We must learn from the housing co-operative movement, which flourished in the 1970s-80s and then crashed when the political winds changed and grant for development agencies and co-ops was withdrawn. I really think we can do it. 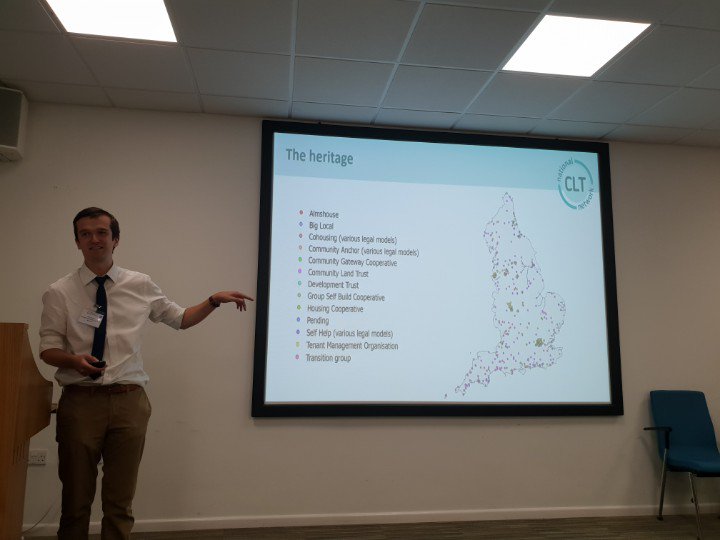 As I was talking about the history of our work to secure the Community Housing Fund, politics almost upstaged me. I joked about Alok Sharma mentioning his longevity in office at our conference last November, weeks before he was reshuffled. At that very moment, his successor Dominic Raab was reshuffled to the Brexit department! That brings us up to 5 housing ministers looking at the Community Housing Fund in just over two years. Thankyfully those at the conference have greater staying power.

Of the many interesting discussions during the day, three things really struck me. The first was a pair of presentations from Austria. It's all too easy, sometimes, to take a rosy-eyed view of what they do in places like Berlin and Holland and wish we could just transfer those models to the UK. It's never that simple. But in Vienna they are developing over a dozen new community-led housing projects thanks to three simple factors that seem very familiar: strong political support, a process to earmark land for the sector, and funding for innovative approaches to affordability. These are underpinned by an enabling organisation that helps groups to form and see through their projects.

In the forthcoming study on our Urban CLT Project you could almost arrive at the same factors. When councils 'get' CLTs, help them to access land, and fund unusual tenures, we can thrive. Our member gatherings have told us - loud and clear - that you want us to do more to help you influence your councils to get to this point.

The second thing that struck me is that we really need researchers to work with us, as those attending are doing. I don't think we understand, very well, how to support CLTs to succeed. We have a few tried and tested models, particularly in the rural south west and Cambridgeshire, but they only scratch the surface of the potential of our movement. While I've overseen the Start up Fund I've seen the wonderful projects that can get going, but also the limitations of a national start-up programme. Those limitations are partly why we're so supportive of local Enabling Hubs, which the likes of Cornwall CLT have shown can be so much more successful. I love that at the National CLT Network we are open to learning and then changing what we do. We don't have all the answers.

As the network of local Enabling Hubs grows, and the Community Housing Fund rolls out, it would be great to have more academic research on their practice.

As we work to complete our new Community Led Homes website, with a groundbreaking online database of groups and projects, we need academics to help deepen our understanding of that data.

You probably have your own research questions you'd like to see explored. We're going to collaborate with the academic community to set those questions and ask the Government to pay for the research. My final cheery thought was how quickly our sector can grow once you plant a few seeds.

When Anna Kear led the research on the sector's deliverable pipeline last year, she came up with just 35 homes in the West Midlands out of the national total of 5,810. Doubtless her team missed some, but it's a long way off the 1,947 homes on the way in the East of England.

But things are changing... 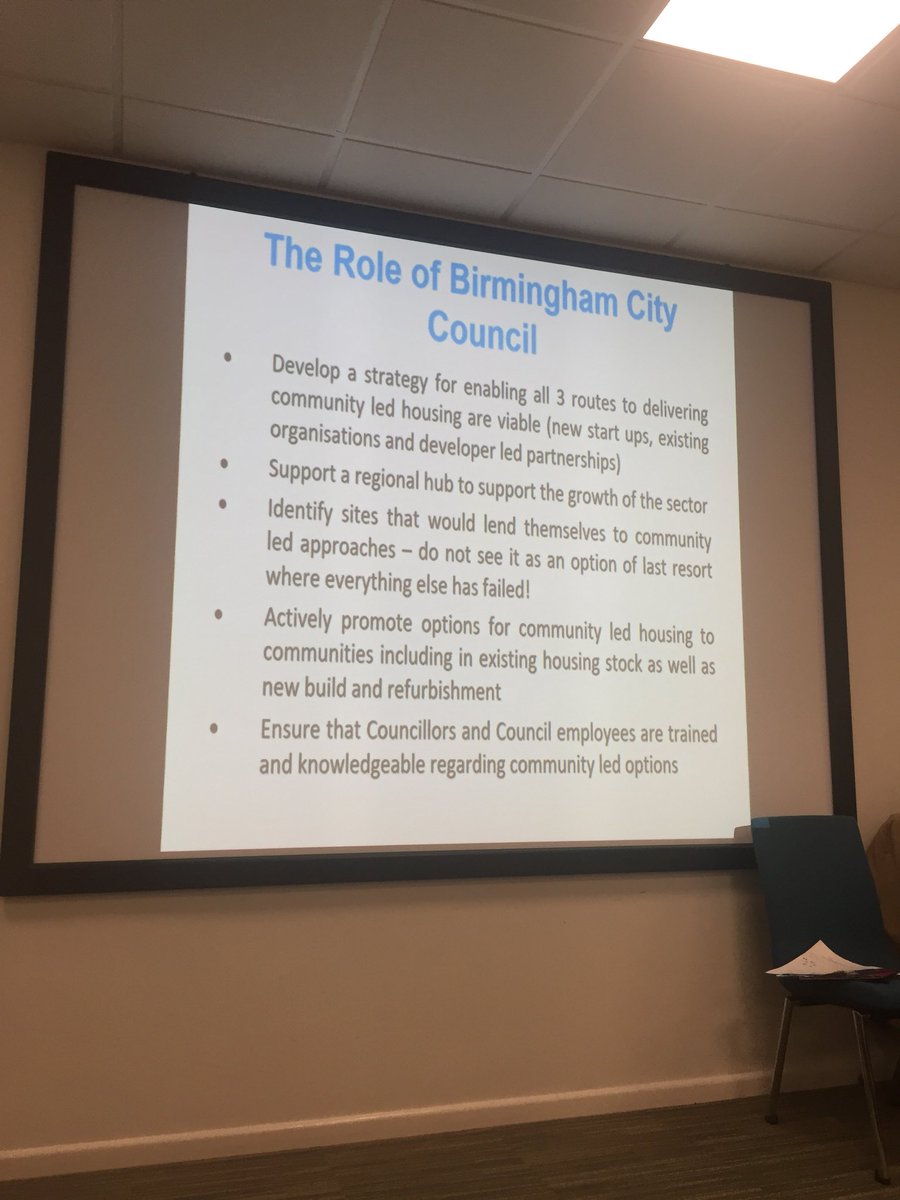 Though there aren'y any established CLTs in Birmingham, there is a rich heritage of housing co-operatives, tenant management organisations and community anchors, but only a couple have been actively building new homes. Now, hope is taking root. In the past couple of years there are new players on the block, a community organising campaign is creating new groups, and a new CLH partnership emerging to support them with an Enabling Hub. Even the city council (the largest in Europe) is getting behind them, the ruling Labour Party having committed to "makes sites available for Community Led Housing" in its manifesto in May. Look out Vienna, here come the Brummies.

I expect that, were we to return to Birmingham in five years (ten housing ministers later!) we will find a pipeline in the Wst Midlands in the thousands.

Hope for Housing is going mainstream. It's such an exciting time to have stepped into Catherine Harrington's shoes.