As the transition to renewable energy gains pace worldwide, marine energy and its predictable and reliable nature, backed by versatile application potential, is bound to find its place in the future energy mix. However, the sector first needs to demonstrate its ability to go large-scale to attract big investments and jump-start the commercialization of the marine energy industry. 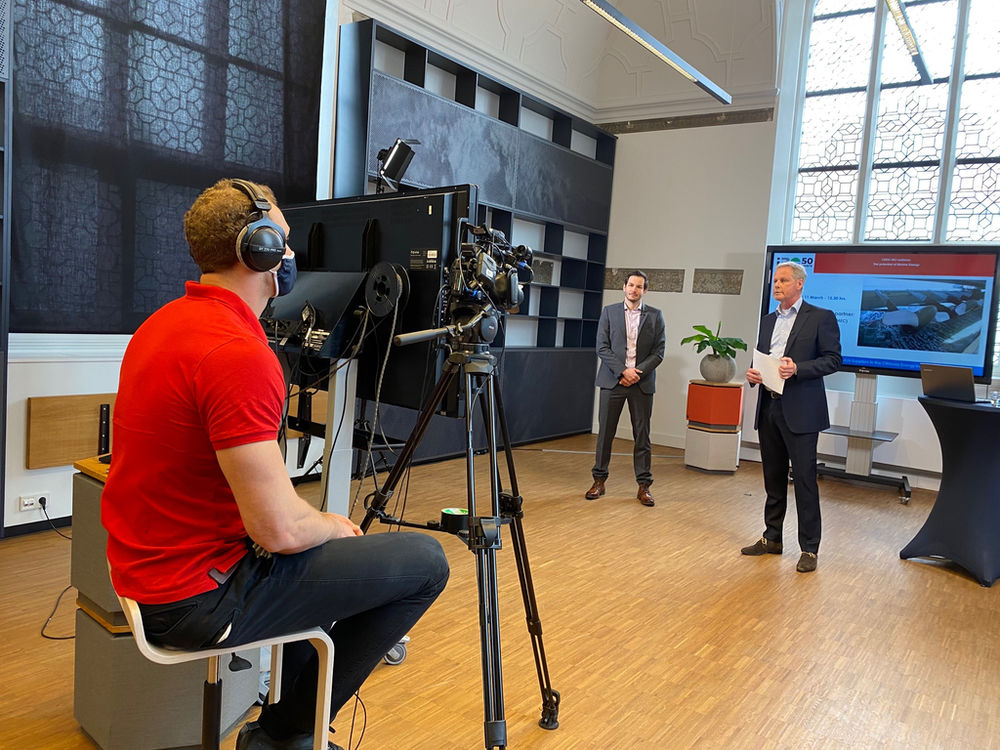 These are some of the key points presented during a webinar organized by IRO (The Association of Dutch Suppliers in the Offshore Energy Industry) and Dutch Marine Energy Centre (DMEC) on the potential of marine energy held on 11 March 2021.

According to Benjamin Lehner, Business and Innovation Advisor at DMEC, who represented the centre, marine energy has an important role to play in the energy transition, especially in terms of balancing the grid as a great addition to wind and solar due to its predictable and reliable character.

Starting from 2030, marine energy could already contribute 8 TWh/y to the energy mix, reaching up to 260 TWh/y, and general market size of €16 billion in 2050, according to Lehner, who also said the levelised cost of electricity (LCOE) for marine energy is expected to become competitive – below 100 €/MWh by 2030 for tidal, and for wave by 2035. This process can be further accelerated by feed-in tariffs.

“There are many markets which are suitable for marine energy technologies. Marine energy technology can energize infrastructure, like Tocardo does in the Oosterschelde – helping coastal protection, and at the same time producing electricity. It can also sustain operations at ports and offshore platforms, and other areas that need to become greener, which is critical in the upcoming period”, Lehner said.

Lehner emphasized the potential marine energy could have in making the oil and gas sector greener, either by directly powering offshore energy platforms, or by producing green hydrogen that could be used for the same purpose.

Also, marine energy could contribute to solving increasing issues in marine spatial planning, as it is possible to combine it with other renewable energy projects, such as offshore wind and solar farms. There are also many growing markets, such as aquaculture and off-grid solutions, where the uptake of marine energy is bound to continue.

Berkhout presented SeaQurrent’s TidalKite device that works on the principles of kiting. It consists of two rows of wings, which when placed in the flow make the kite move perpendicular to the water direction creating a traction force. The traction force is then converted to electricity in the device’s power take-off (PTO) system. 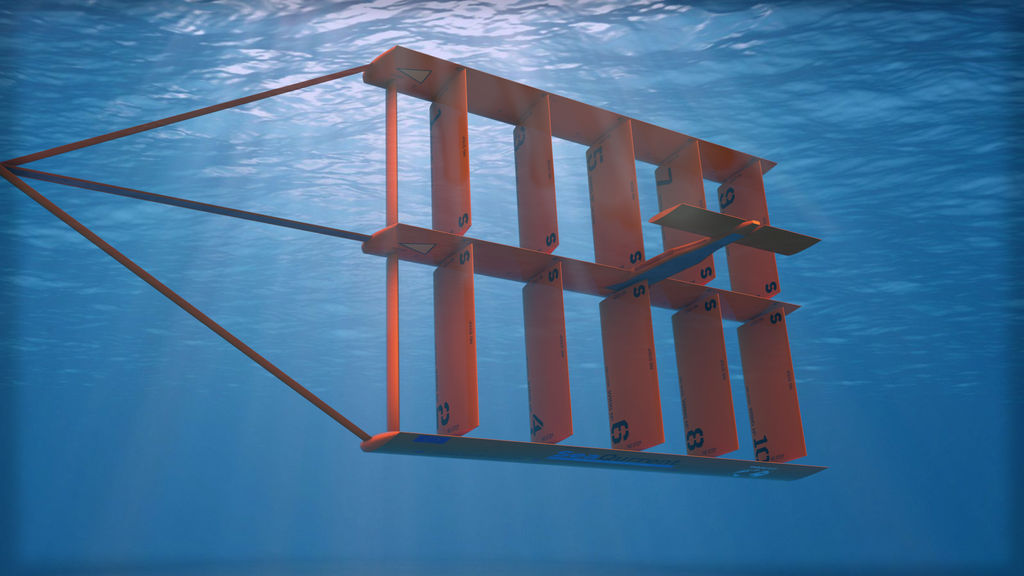 The benefits of the TidalKite are particularly obvious in shallower areas, as the device covers a larger area to operate, making it suitable to harvest the energy from the lower velocity flows.

The company is planning to deploy the first full-scale demonstrator in the Netherlands later in 2021 and is currently looking for cooperation opportunities with installation and maintenance companies to ‘make the TidalKite the next big thing in Dutch water engineering exports’.

Berkhout said the industry should adopt a ‘learn by doing’ approach as that is the only way to remove the uncertainties that always surround new developments.

Ramsey Nehme from SBM Offshore talked about the company’s S3® Wave Energy Converter based on adaptive geometry whose design was adapted to overcome the limitations of conventional technologies.

The S3® Wave Energy Converter does not include any mechanical parts. The device is a fully flexible tube filled with water and closed at both ends. When the water inside is coming to resonance with the wave outside, the device stretches and relaxes, changing its diameter and therefore producing direct electrical charge. 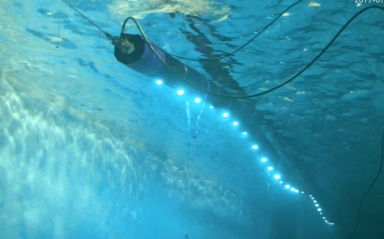 The device’s energy conversion system is made of the electro-active polymers (EAP) that is basically the body of the wave energy converter, while the PTO is directly embedded in the structure.

The company is currently focusing on developing a small-scale prototype.

Spanning roughly 60 metres in length and 1.2 metre in diameter, the prototype is being planned for testing near Monaco area.

According to SBM Offshore, the S3® device could be a game changer in the industry with very competitive LCOE.

Richard Parkinson from HydroWing said that one of the big challenges for tidal energy is the operational cost, particularly on the larger turbines which can be prohibitive to advancing the technology.

Therefore, Hydrowing device is being developed to alleviate that issue. According to Parkinson, the HydroWing device combined with Tocardo’s tidal turbines can produce bankable tidal energy projects that can compete with offshore wind and other technologies.

Its concept revolves around two removable wing structures (turbines) on a jacket-type foundation, which is gravity based onto the seabed. The turbines are staggered forming flow corridors preventing wake-turbine interaction. The wings are wet-mate connected onto the structures and can be recovered using davit lifting system on a floating vessel – a barge, or small DP vessel – for easier maintenance. 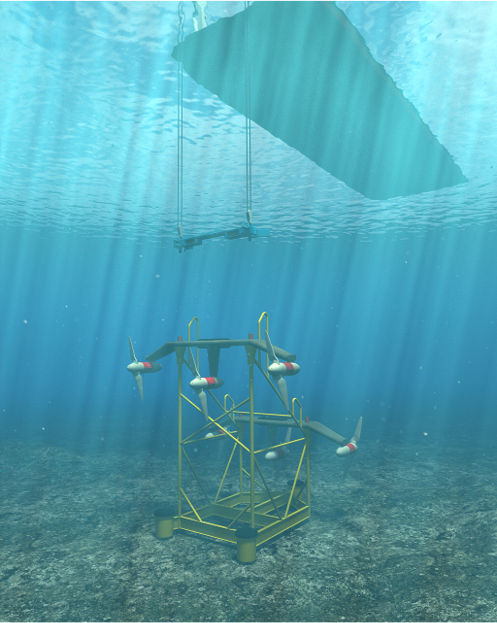 “We’re looking at installing mass devices. One advantage of using small turbines is that we have a lot less wake effect than the larger turbines, which means we can get a very high packing density and a very high amount of yield”, Parkinson said.

The company is developing a single wing HydroWing (Single HydroWing) for shallower waters of less than 20 metres and a Double HydroWing, which is designed for deeper waters.

Also, the company is working on a concept for a DP vessel which will serve the sector once the industrialization takes off. The single vessel could be able to install between 75MW to 100MW of tidal capacity a year, and HydroWing’s calculated installation cost is one third of the cost of installing offshore wind turbines, according to Parkinson.

According to Benjamin Lehner, a lot of subsidies are coming up for the marine energy sector. In the European Union’s new funding programme Horizon Europe, which will be launched soon, there will be specific calls for tidal and wave energy, and generally, a lot of designated funding for marine energy solutions. 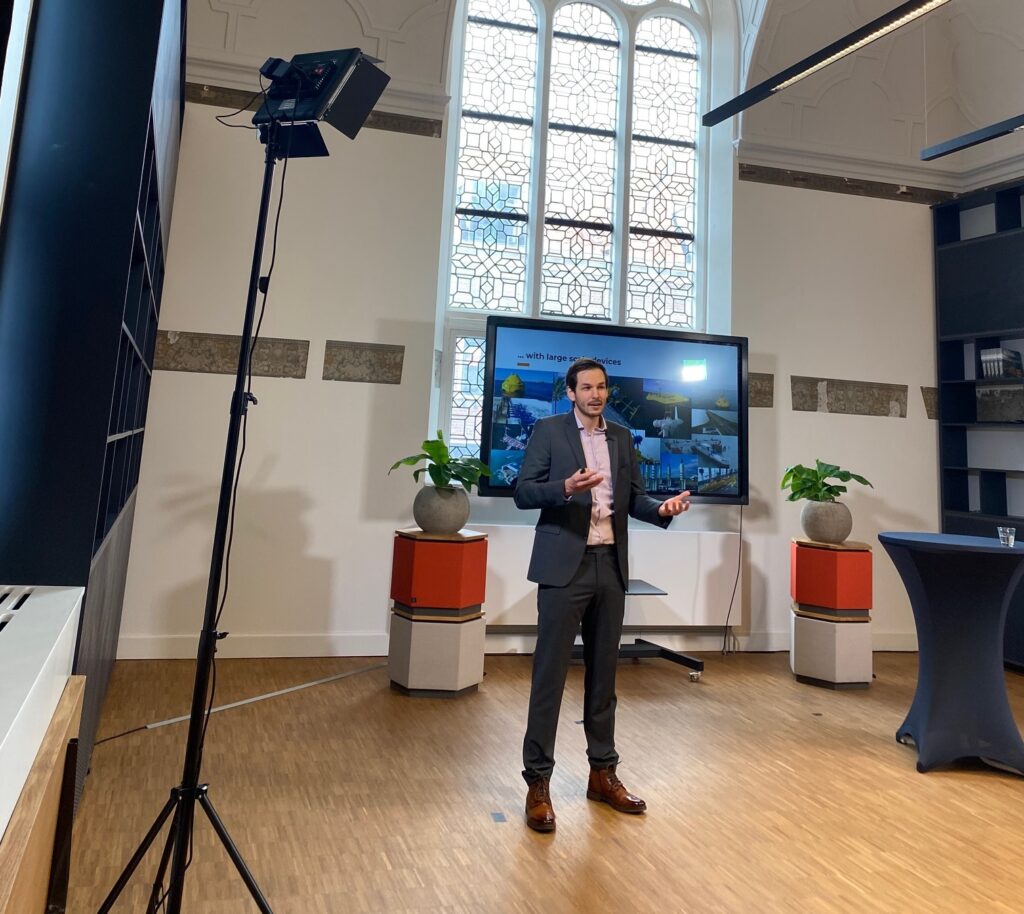 Lehner encouraged technology developers to apply for the funding, inviting the Dutch companies to also join DMEC Marine Energy Community that was recently launched to bring together the Dutch marine energy industry and keep it informed and up-to-date with all the available collaboration and funding opportunities.

Tjerk Suurenbroek also noted that IRO will continue to support the marine energy sector, and with almost 400 member companies, will remain committed to boost the development of the sector.

Getting investments still remains one of the greatest challenges for the marine energy sector, but according to Richard Parkinson, the crucial thing for attracting the investments is to demonstrate the sector can go large scale.

“I do not think that any technology in tidal sector, and certainly not in the wave sector, is totally mature. There is still a lot of scope for disruptive technologies. Getting investment is a challenge, particularly the scale we are working at.

“Going subsea and being able to mass produce is our next step in order to attract investments, but we need to think big to make it happen. We need to be thinking 50-100MW scale projects, and the investments will be there”, Parkinson concluded.

The recording of ‘The potential of Marine Energy’ webinar is available for watching below.