Salvo has released its latest Newsletter with a very good report of their activities in FCRBE project for the last six months. The article initially published on Salvoweb reproduced it here, but do not miss the opportunity to check more great content in their newsletter! 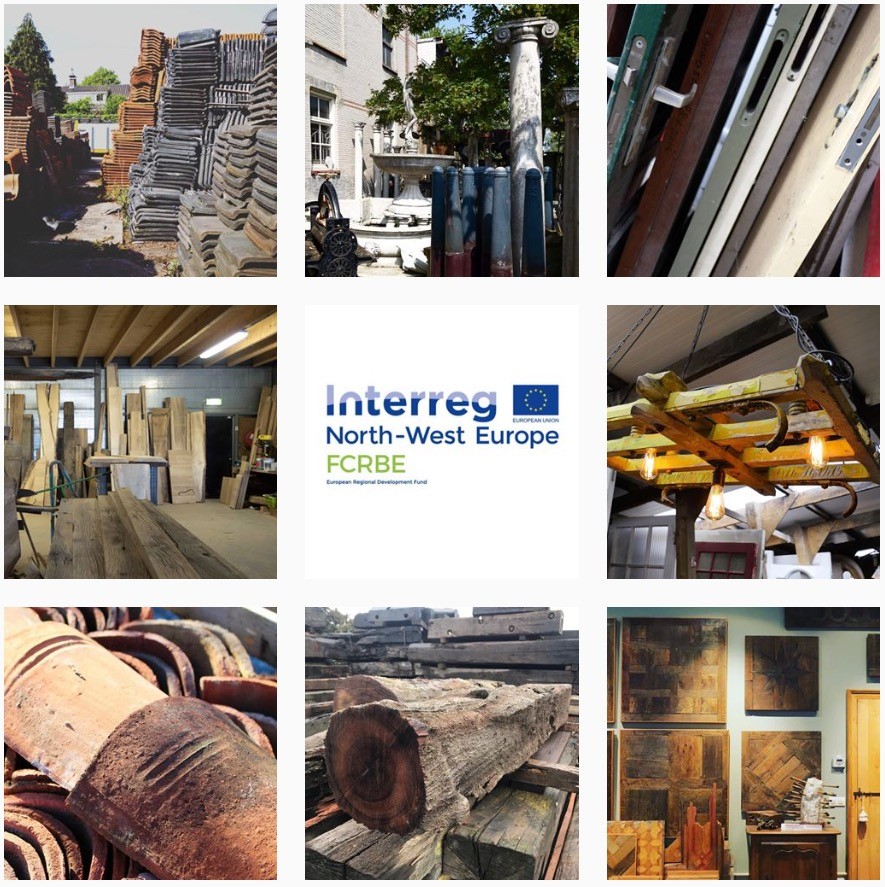 Kent, UK - This is a brief report on Jan - Jun 2020 of Salvo's activities in the FCRBE* EU project, which Salvo calls futuREuse** that aims to increase reuse of reclaimed building materials. There are eight main project partners, lead partner Rotor of Brussels, Bellastock of Paris, together with a number of European building research institutions, the UK's University of Brighton headed up by Duncan Baker Brown, and of course Salvo Ltd. In addition to a number of associate partners, many architects, public and private sector construction firms have joined or are proposing to join a pilot testing program. Around 1500 stockholding salvage businesses will be listed by the project, many of which are now official stakeholders. (Main images are photo montages of 53 of the 1500 businesses - see Instagram link below).

Over the last six months Salvo has contributed to articles and carried out numerous meetings, which included discussions with the Principal Policy and Programme Officer Waste and Green Economy Team at the Greater London Authority. Apart from the project activities, a number of broader discussion issues have cropped up since January.

The main topics are:
- how to measure the environmental benefit of reclamation and reuse
- how to categorise architectural antiques and salvage, traditional reclaimed building materials and modern salvage stocks
- how long term ten-year aims will work in countries which are centrally regulated as well as those which are more libertarian
- how to measure whether the long term aim has been achieved in 2032
- how reclamation audits of to-be-demolished-buildings circulated freely to architects and specifiers can increase commercial dealing by stockholders
- how to create temporary reclamation transfer depots in cities to avoid mass movements of dismantled materials out of cities and then back in again when buildings are demolished
- how to remedy workforce diversity imbalance due to the increasing relocation of salvage businesses out of cities into rural yards
We are keen to hear from potential stakeholders and other interested parties who wish to join this discussion.
Please contact thornton.kay (at) salvo.co.uk

Salvo is creating the futuREuse FCRBE directory of 500 antique, reclaimed and salvage businesses in the UK and Republic of Ireland. We plan to visit 100 businesses and contact the remaining 400 by phone and email. Bellastock and Rotor, our partners in France and Belgium, are gathering details of another 1,000 businesses to produce a combined total of 1,500 dealers in north-west Europe.

Last year Becky Moles, Sara Morel and Thornton Kay of Salvo visited 44 of these businesses and intend to visit the remainder this year. The other 400 have been telephoned and emailed and asked to complete a brief survey on their business, reclaimed stocks and services. The FCRBE project and its objectives were also explained. Follow-up emails were sent to non-responders. Salvo has now written directory profiles of responders which have been uploaded to Salvo together with photos and a list of regularly stocked materials.

The Salvo directory has been going for 30 years and spans a large number of countries. During that period directory entrants have been listed under three broad categories - architectural salvage and antiques, traditional reclaimed building materials and modern salvage. In mainland Europe there seem to be more modern salvage operators than in the UK and Ireland. A few more modern salvage businesses including, for example, specialists in reclaimed steel sections, are being added to the directory.
The futuREuse directory currently has 102 businesses listed and can be accessed from the link below, which is also on the footer of all pages on salvoweb.com

Businesses in the FCRBE directory have completed a simple survey about their business and stocks. Completed business surveys are being anonymised and then aggregated for statistical report about the state of the trade by project partner CSTB in Paris. The team is also making an assessment of the total reclaimed stocks held by the trade in countries in the project area. Salvo will compare the UK position with the previous BigREc Surveys in 1998 and 2007. Our long term intention is to create a way of using salvoweb.com to make these stock assessments in future.

A main output of futuReuse is the launch by Salvo of a new label to verify that a product is truly reclaimed. A workshop was held in Norfolk attended by around 15 dealers to discuss the proposed label where Thornton Kay gave a brief introduction. The label would be useful to architects, specifiers and others in mainstream construction who might be confused as to which products were genuine reclaimed and which were new products made to look like reclaimed. Fake reclaimed and get-the-look reproduction materials have been on the increase in buildings over the past decade, especially in the hospitality and retail sectors, and these products are being used to dupe visitors into thinking that a company is eco-friendly because it looks as though it uses reclaimed materials, even though they are actually new. There are a number of interested stakeholders in the label who will be kept informed of progress and invited to join in due course. Salvo decided on a soft launch, probably with one or two long-established Salvo Code dealers, so the initial steps can be taken under the watchful eyes of stakeholders and interested project partners.

A ‘Truly Reclaimed’ leaflet was produced to promote the concept, which also listed questions on the implementation of a label. These leaflets were used at the workshop in Norfolk and were also sent to the Midcentury Modern show in London. Dealers were interviewed to canvas opinions on the label.

Salvo has already created, implemented and run a code for dealers for the past 25 years which is still active. In 1993 Thornton Kay was requested by the UK heritage sector to establish a scheme for good practice in stock purchasing by dealers of architectural salvage. After two years of discussion with dealers and auction houses Salvo established a voluntary code of conduct - the Salvo Code - to which around 80 salvage businesses now belong. The code has changed over time to reflect concerns such as fair trade and modern slavery, but changes were always agreed by the existing members with unanimous consensus. Salvo plans to use its Salvo Code experience in the formation of the Truly Reclaimed label, and will gradually roll it out to a small group of UK Salvo Code dealers - and then to others in the UK and Europe. The aim is to establish the label firstly for reclaimed timber and wooden flooring materials by the project end. After 2022 we would like to see more reclaimed materials labelled with Truly Reclaimed.

The FCRBE project includes 33 pilot operations which aim to test the tools and methods being developed during the project. Faye Thorley is the manager of the four pilots which Salvo is undertaking, one of which is planned to be done jointly in partnership with Rotor. In the past six months material research was undertaken including discussions with potential pilot associates. Certain materials have been more successful to identify, for example, timber and bricks for which the SalvoWEB and Opalis directories have been the go-to tool. Various potential architectural practices are in discussion with Faye about involvement in the pilot programme. One, for example, is a London-based international studio of architects and designers known for innovative and socially useful architecture which won the RIBA Stirling Prize 2017, Building Design Architect Of The Year 2014 and Building Design Housing Architect of the Year 2015. Some of the reclaimed materials have proved elusive as they are not normally found for sale on the UK reclamation market, eg reclaimed black-coated box profile or corrugated steel cladding and a two storey second-hand steel staircase.

Other potential stakeholders in construction were introduced to the pilot program, including two small northern architectural practices interested in reuse and a global business overseeing the dismantling of a major UK airport terminal. Belgium partner Rotor was keen to explore this project with Salvo, however, access onto the site to carry out auditing may be problematic and required further assessment.

If you are a dealer or a designer that has supplied a fashion brand or boutique with reclaimed items and would like to participate, please get in touch with Becky and Sara - sara (at) salvo.co.uk