The importance of thin white lines 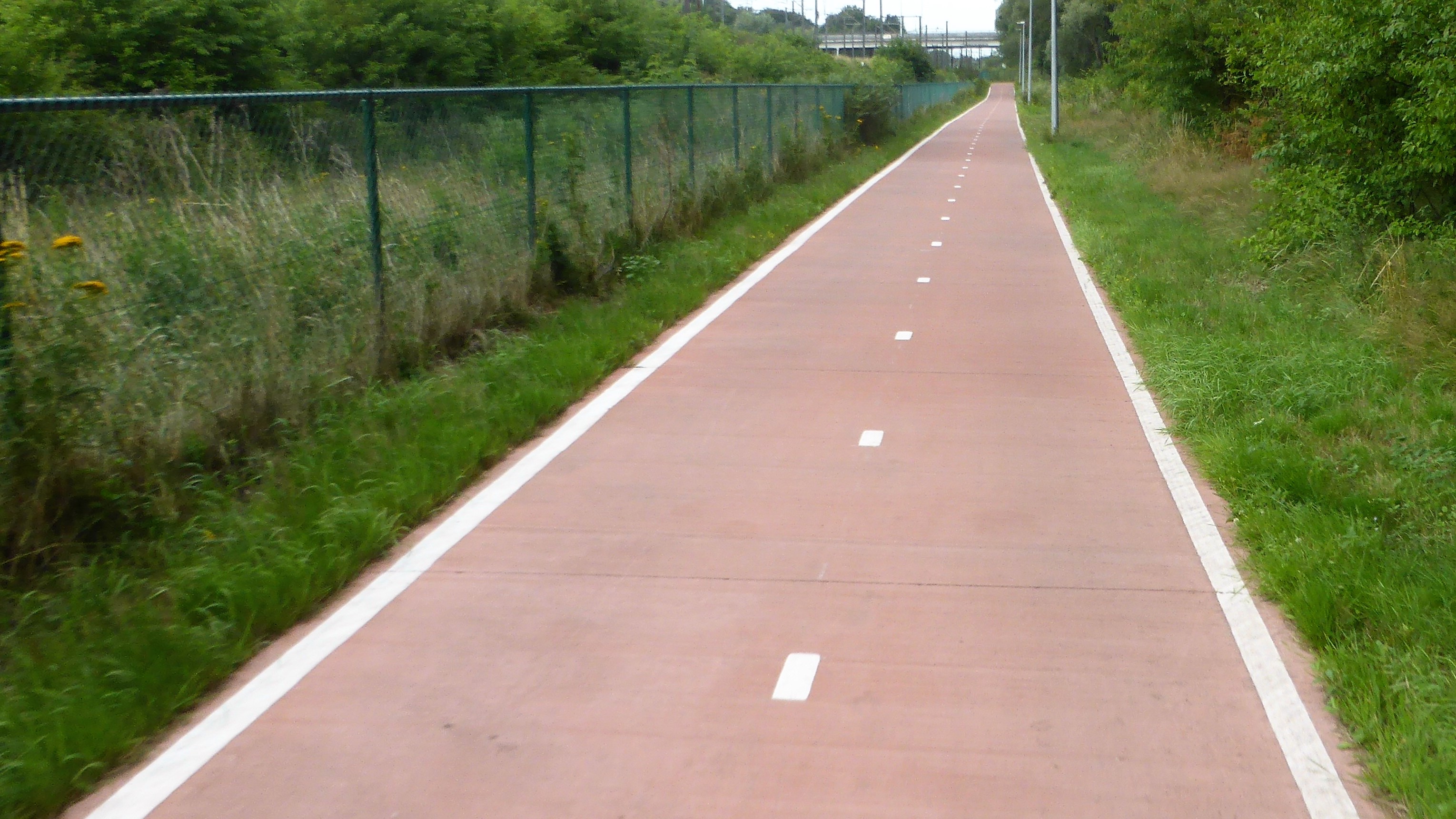 Road markings play an important part in cycle highway’s readability and safety. They help the cyclists to follow the route, especially in poor visibility conditions, improve the recognisability of cycle infrastructure for other users, and can also warn against obstacles.

Continuing the series of articles showcasing the cycle highways infrastructure, we examine how and where CHIPS project partners apply horizontal signage – median and edge markings.

Median markings on bidirectional cycle paths help the cyclists follow the route and clearly see the direction in which the cycle path is heading. It serves as delimitation between lanes allocated for both directions.  If the visibility of the route ahead is limited, median marking can reduce the risk of head-on crash. They can also help the other road users to recognise that this is cycle path.

The frequency and density of the median marking varies between countries. It can also be used – in a way similar to median markings on a carriageway – as a way of communicating simple messages to the users. Rare strips (for example 30 cm every 3 m) denote straight sections with good visibility and no obstacles. When extra attention is needed (because of incoming curve, obstacle or crossing), strips can become longer, more common or turn into a continuous line.

Median road marking can also warn the bicyclists against bollards that protect the cycle path from becoming a parking place or a shortcut for cars. We will write more about bollards in a separate article.

Edge markings help to recognise the verge of rideable surface.  In night-time colours are not as clearly recognisable and the asphalt or concrete pavement might be quite similar to the grass next to it.  The problem is less severe if the pavement is brighter shade, but nevertheless clear white edge markings can prevent cyclists from running off the road (and losing control of the bicycle after entering the uneven surface). This is particularly useful in curves.

If the cycle path runs next to a wall or is delimited with a high kerb, edge markings can be used to delimit the space, where bicycles can ride safely without the risk of hitting the wall or kerb with handlebar or pedal. Similarly, if the cycle path runs adjacent to the carriageway, the markings can create a buffer zone, which cyclist should avoid to not get hit for example by car mirror.

…in late autumn, when days are short and it might be dark during commuting hours. Edge markings can enhance visibility of road alignment even more than adding lighting.

…for older people, who often do not have as good peripheral vision or contrast sensitivity.

…in significant cycle traffic. Riding behind someone one might not be able to have a clear picture of the situation ahead. 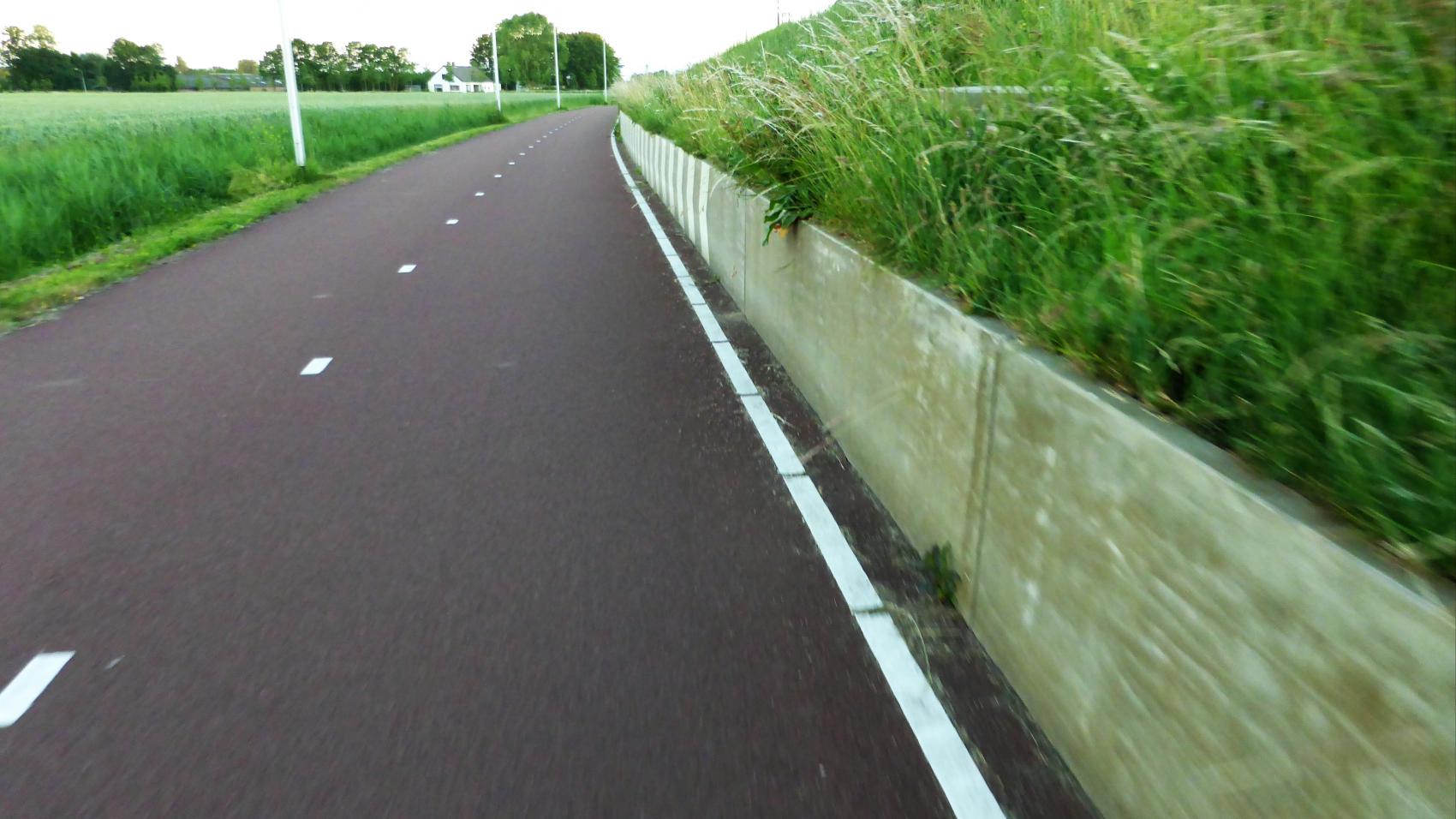 Rare median markings (30 cm line per 3 m) and one-side edge marking to denote the buffer zone and improve the visibility of a low wall. RijnWaalpad cycle highway in Gelderland. 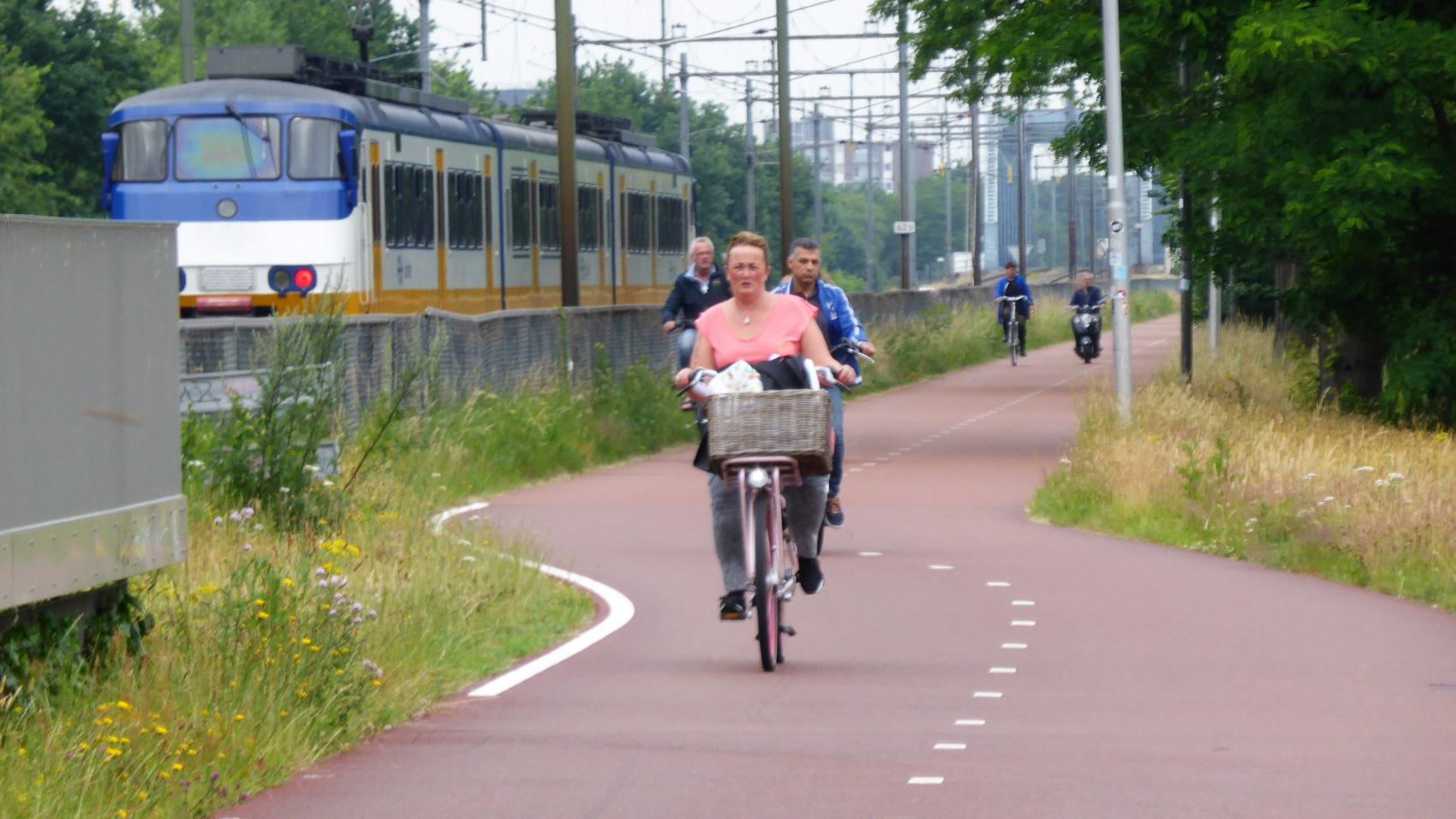 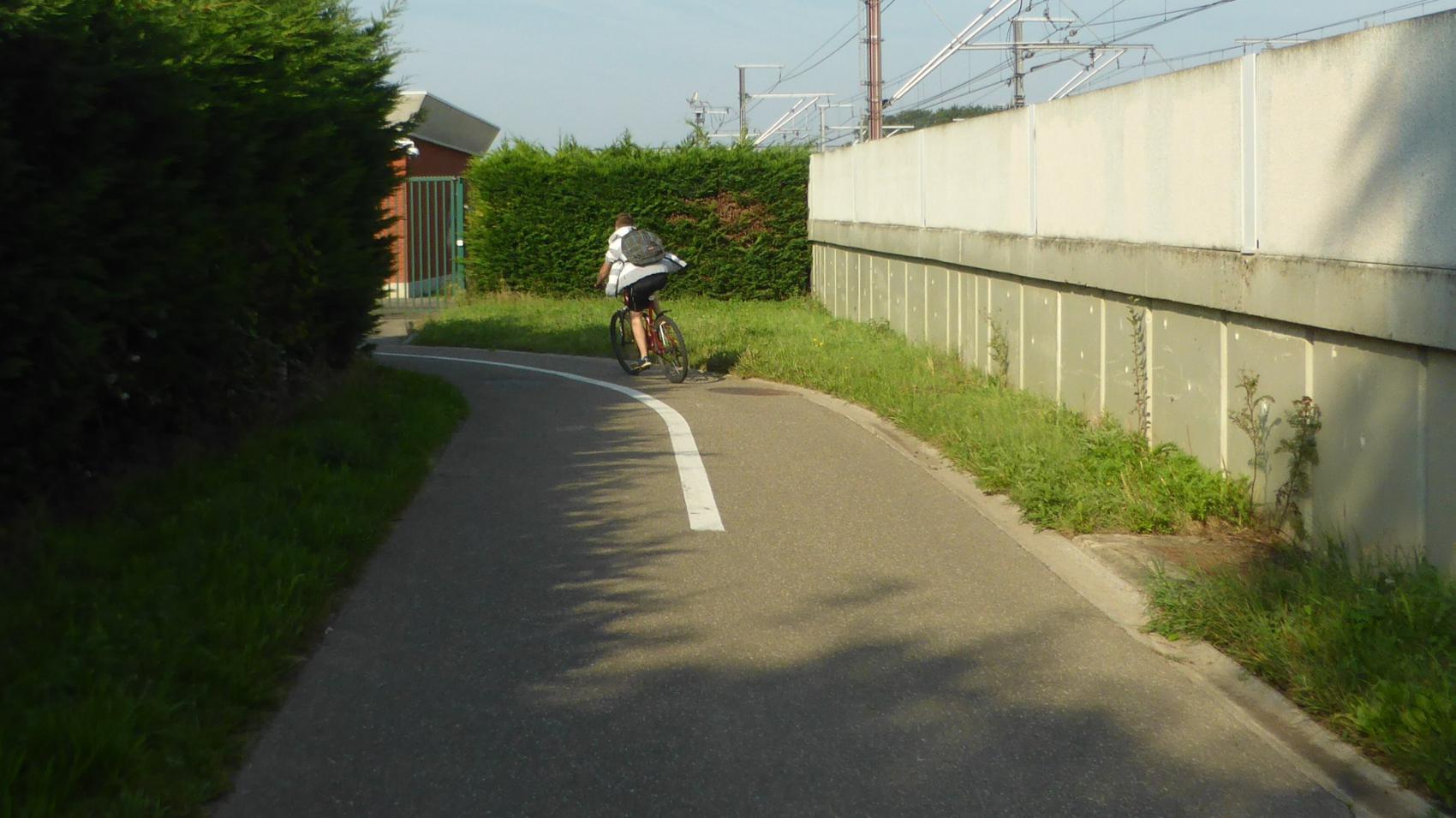 Continuous median marking starts before a curve with limited visibility, serving as a reminder to keep to the right side. F3 Leuven – Brussels. 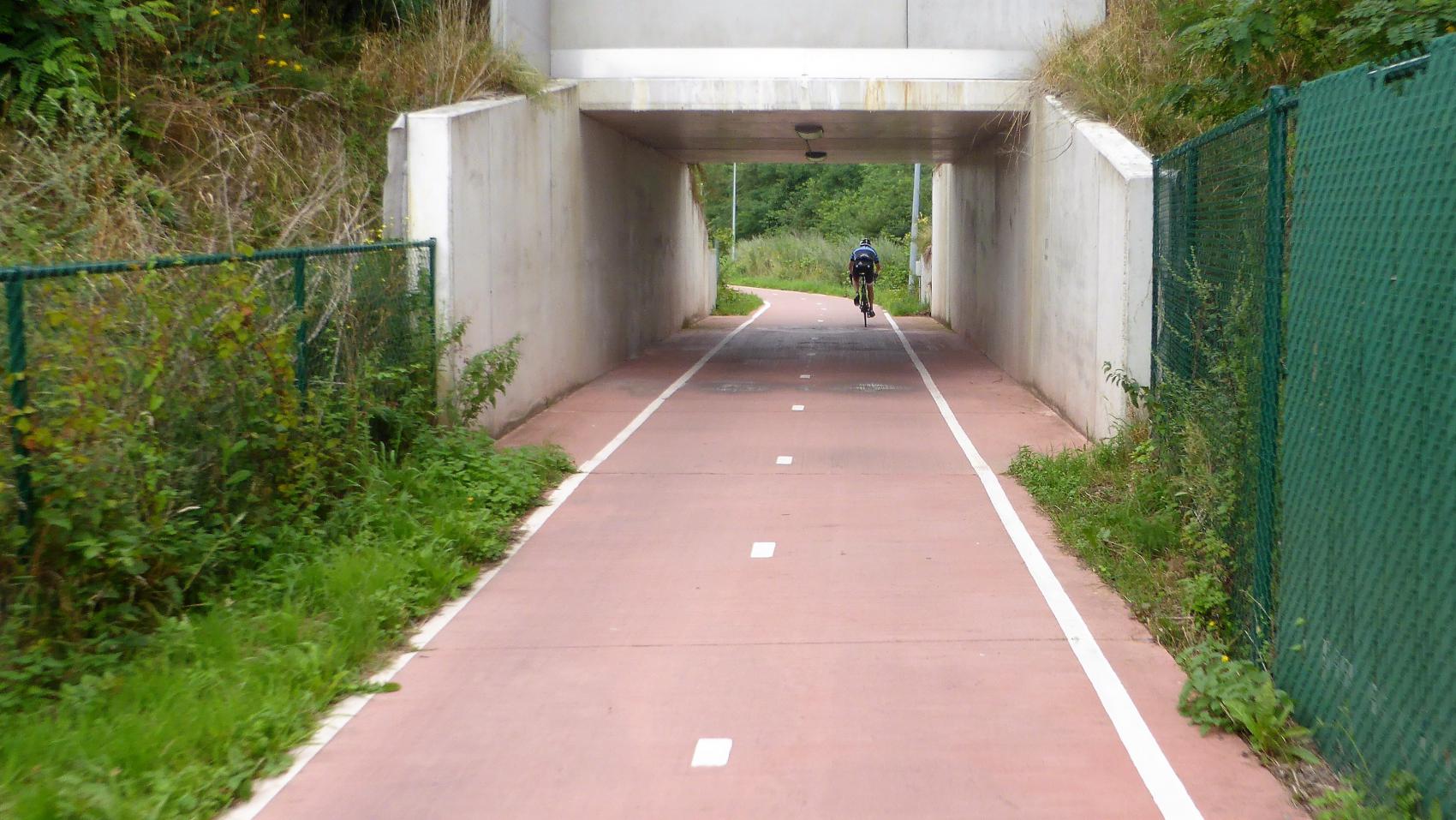 Median and edge markings on both sides on the Antwerp – Brussels (F1) cycle highway. Note the clearance between edge markings and tunnel walls. 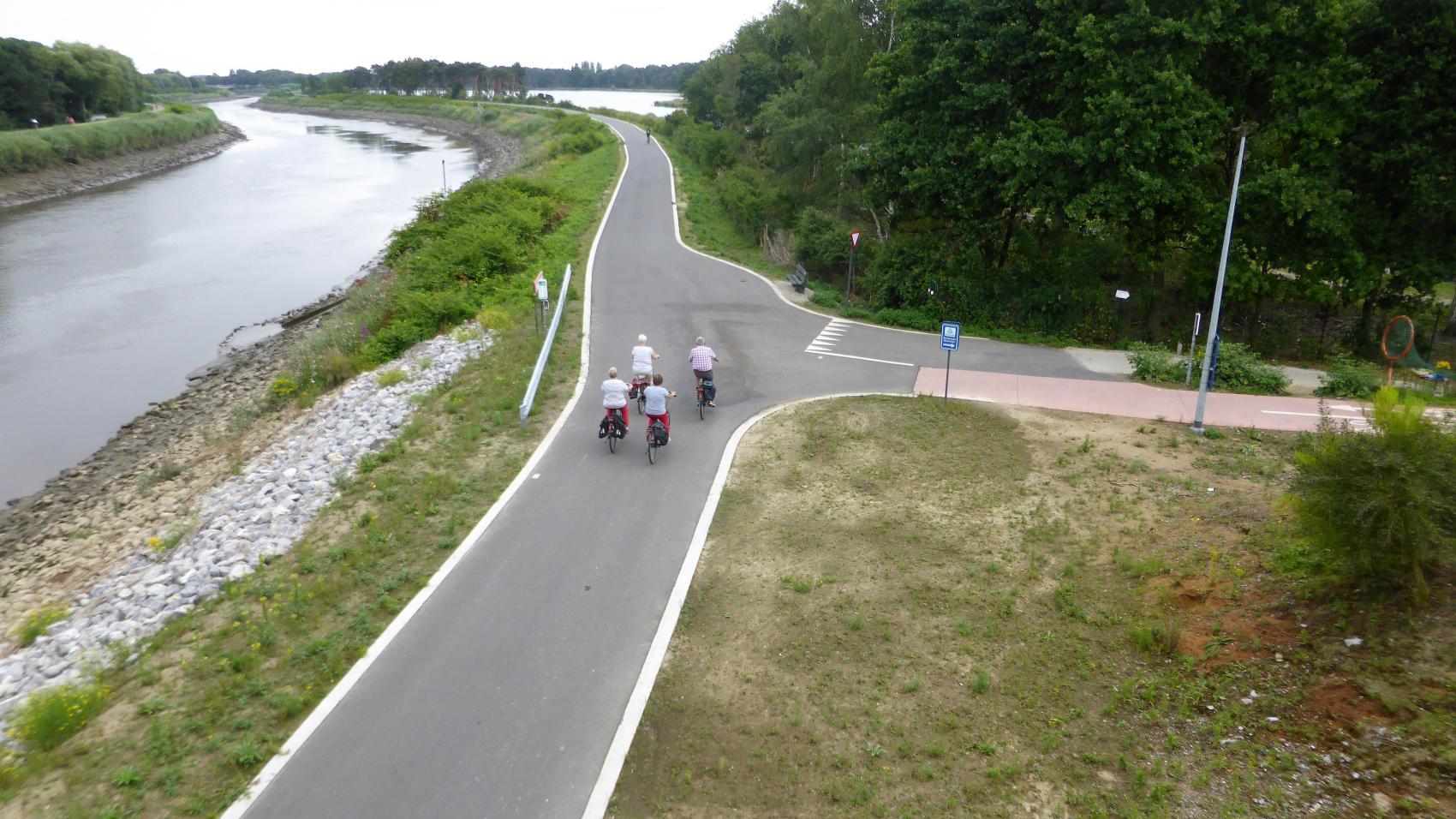 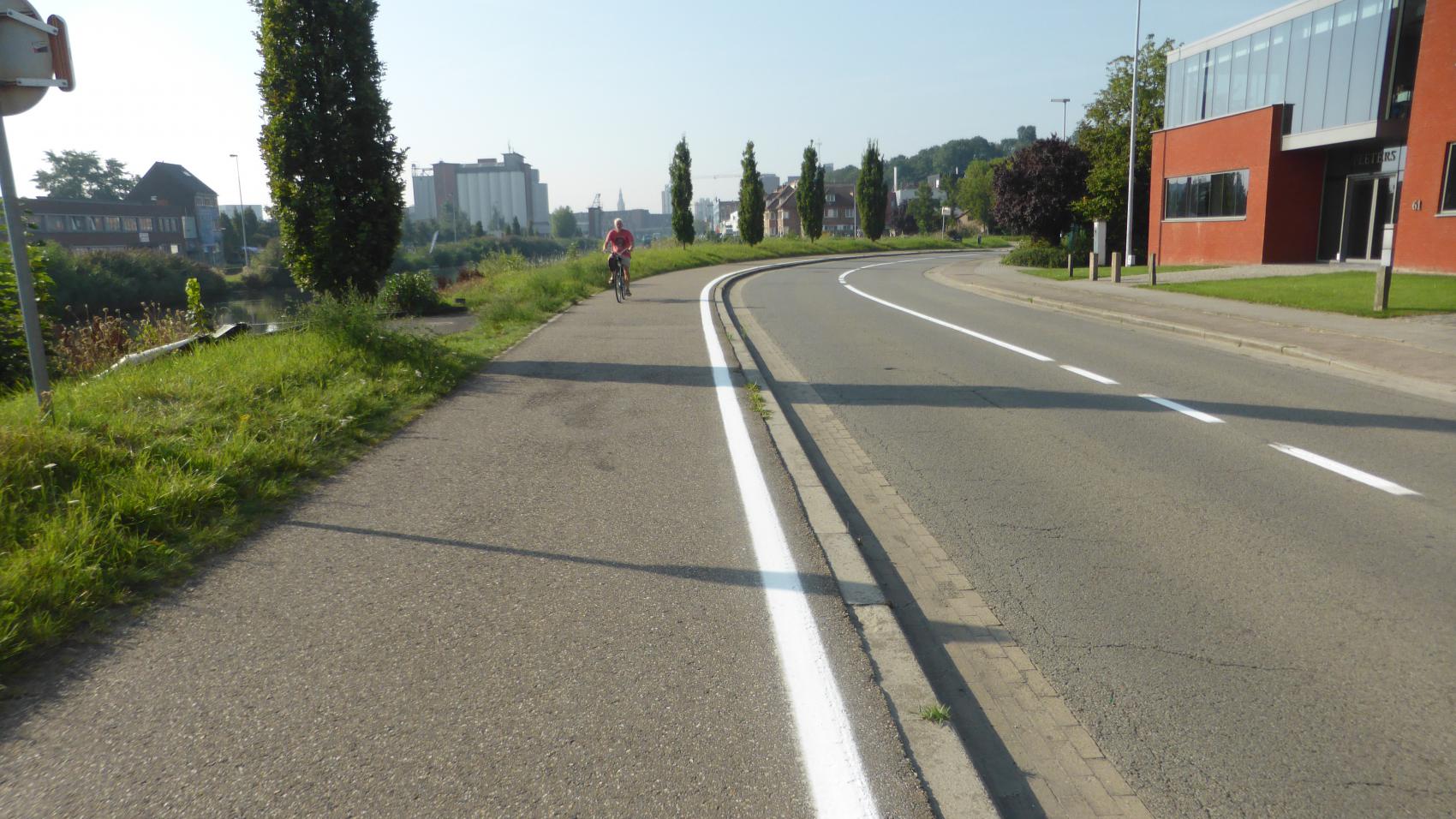 See also: “What do cyclists need to see to avoid single-bicycle crashes?”