RijnWaalpad - a cycle highway with (almost) no interruptions

With this article we inaugurate a new series showcasing infrastructural solutions on cycle highways in North-Western Europe. We start with RijnWaalpad in the Dutch province of Gelderland.  The cycle highway connects Arnhem (150,000 inhabitants) and Nijmegen (170,000 inhabitants), the two biggest cities in a metropolitan area of over 700,000 inhabitants (and also the hosts of Velo-city 2017). The length of the cycle highway is 15.8 km (18 km including the connections to the city centres).

The route was officially inaugurated in 2015, and further improved in 2016 with the opening of the Kattenleger tunnel. Its official number is F325, mirroring the number of the nearby motorway A325. The construction cost 17 million euro.

There are no traffic lights on RijnWaalpad: major roads are crossed by bridges or tunnels and on minor streets traffic has to give way to the cyclists travelling on the cycle highway. In most cases the priority for RijnWaalpad was ensured by raising the crossing to create a speed ramp for motorists, clear continuity of the cycle highway’s red surface, yield signs and respective horizontal markings on the road. In places with higher traffic volumes, additional measures were taken to improve safety by slowing down the car traffic and drawing drivers’ attention to the crossing location. Specifically:

- At the crossing with Ressensestraat in Ressen, the bidirectional carriageway is reduced to a single lane.

- At the crossing with Vrouwe Udasingel in northern Nijmegen, extra speed cushions were added 20 m before the crossing.

Lack of interruptions is one of the key criteria that a cycle highway should meet. Analyses of the bicycle traffic show that users appreciate the smooth ride with no stops on RijnWaalpad and show a preference to choose it over the alternative route via Elst. 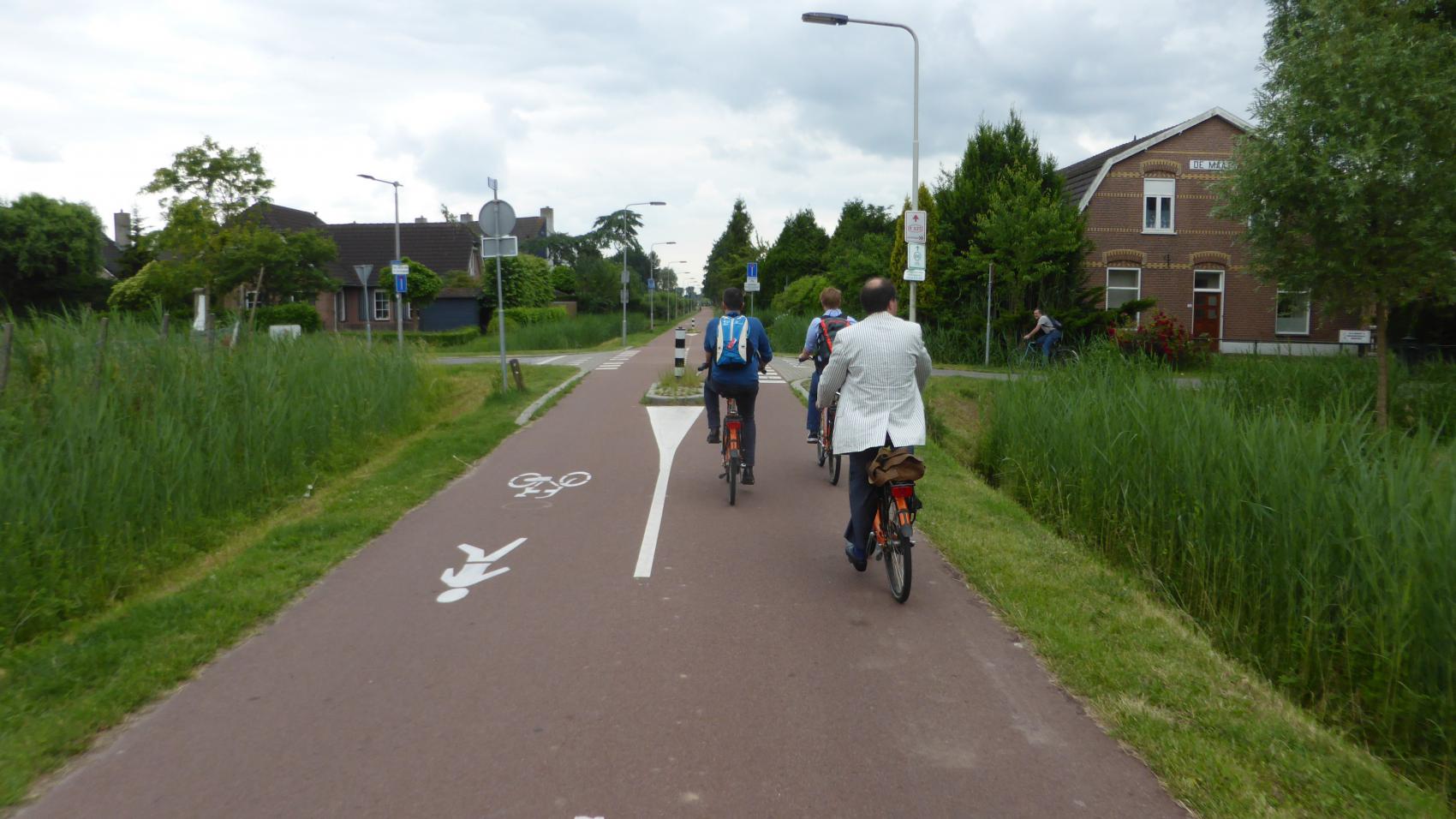 Clear priority of cycle highway over Mooieweg in Arnhem. 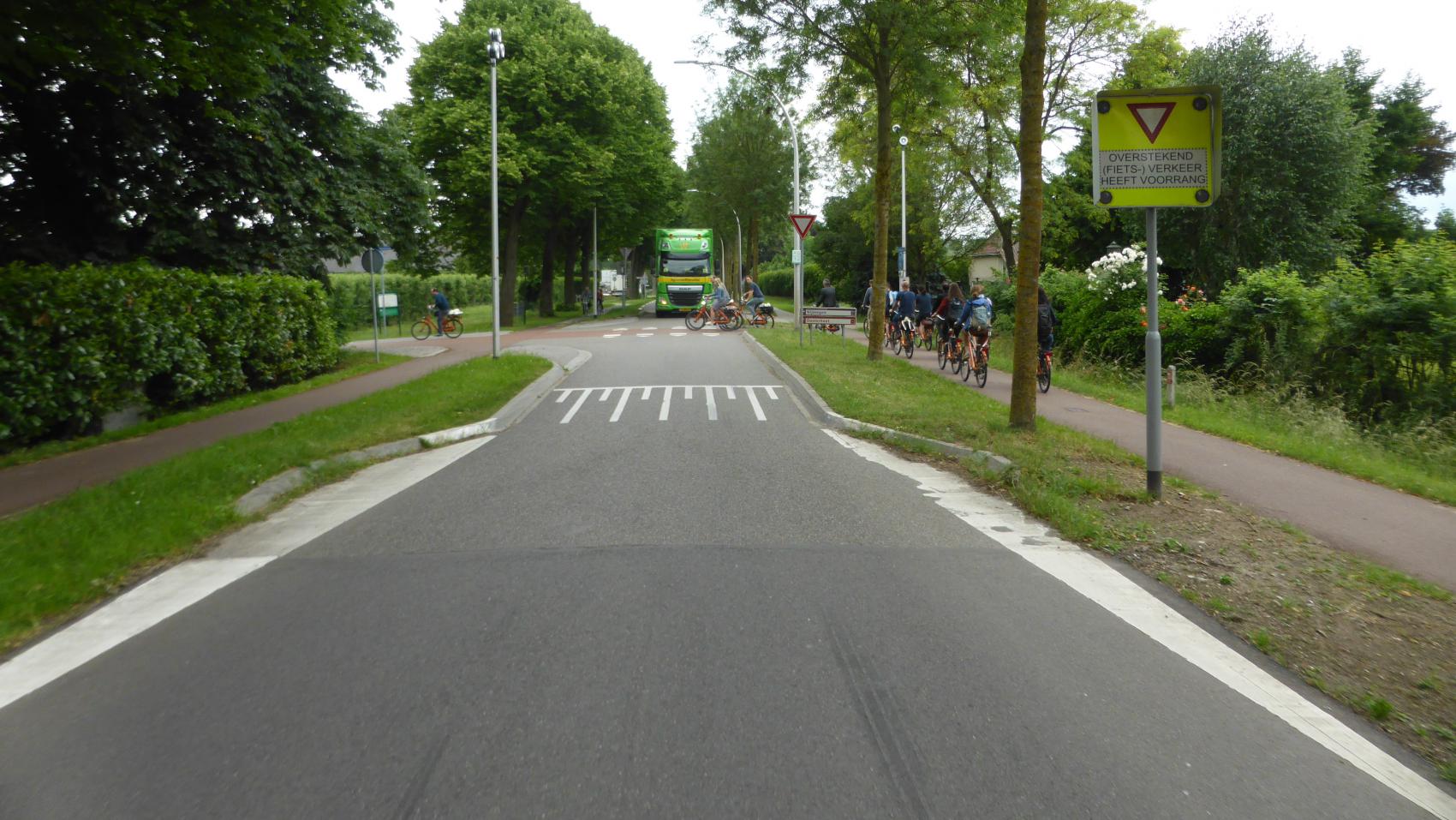 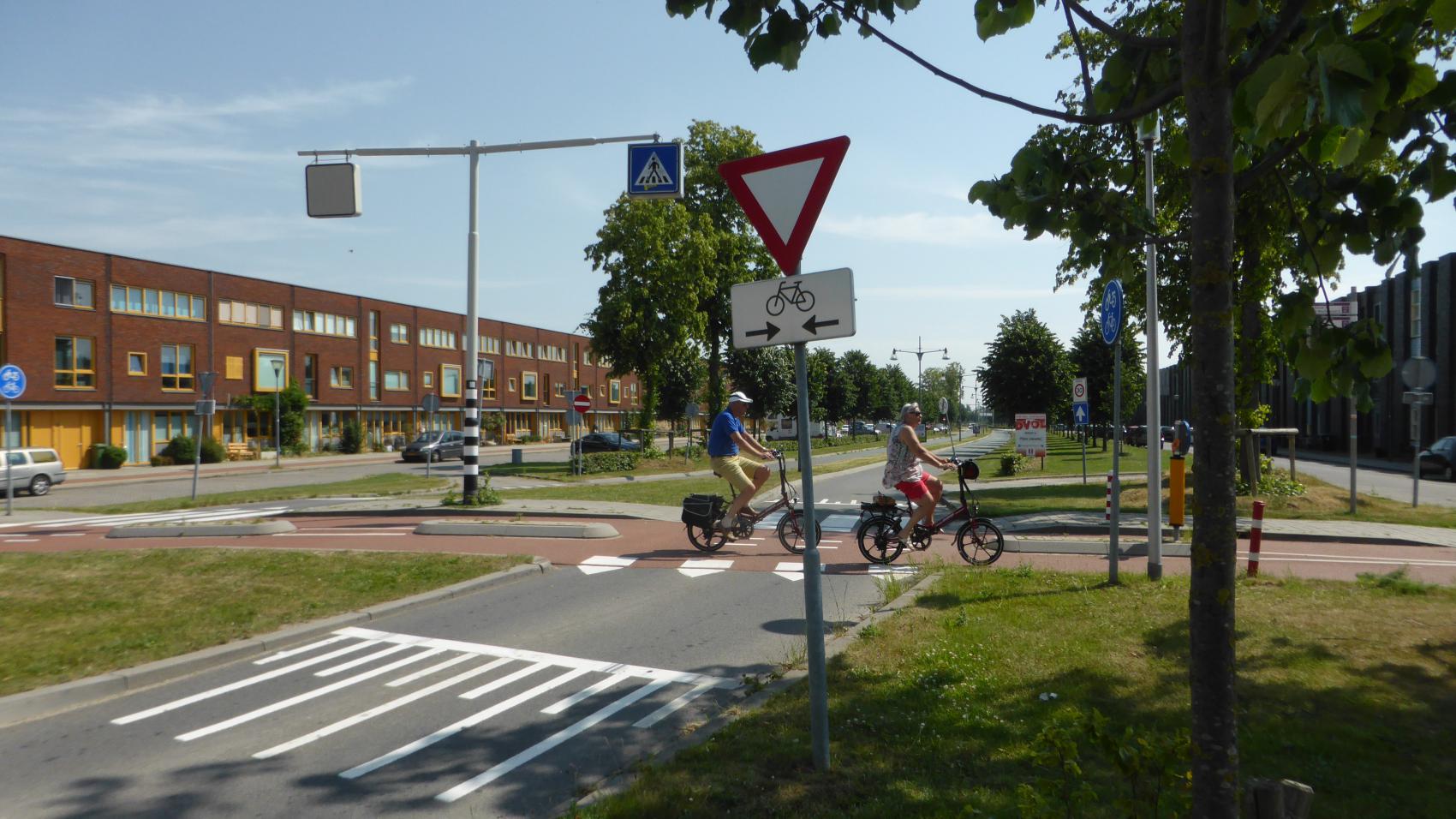 Clear priority of the cycle highway at crossing with Vrouwe Udasingel. For additional safety, traffic cushions were added on the carriageway 20 m before the crossing. 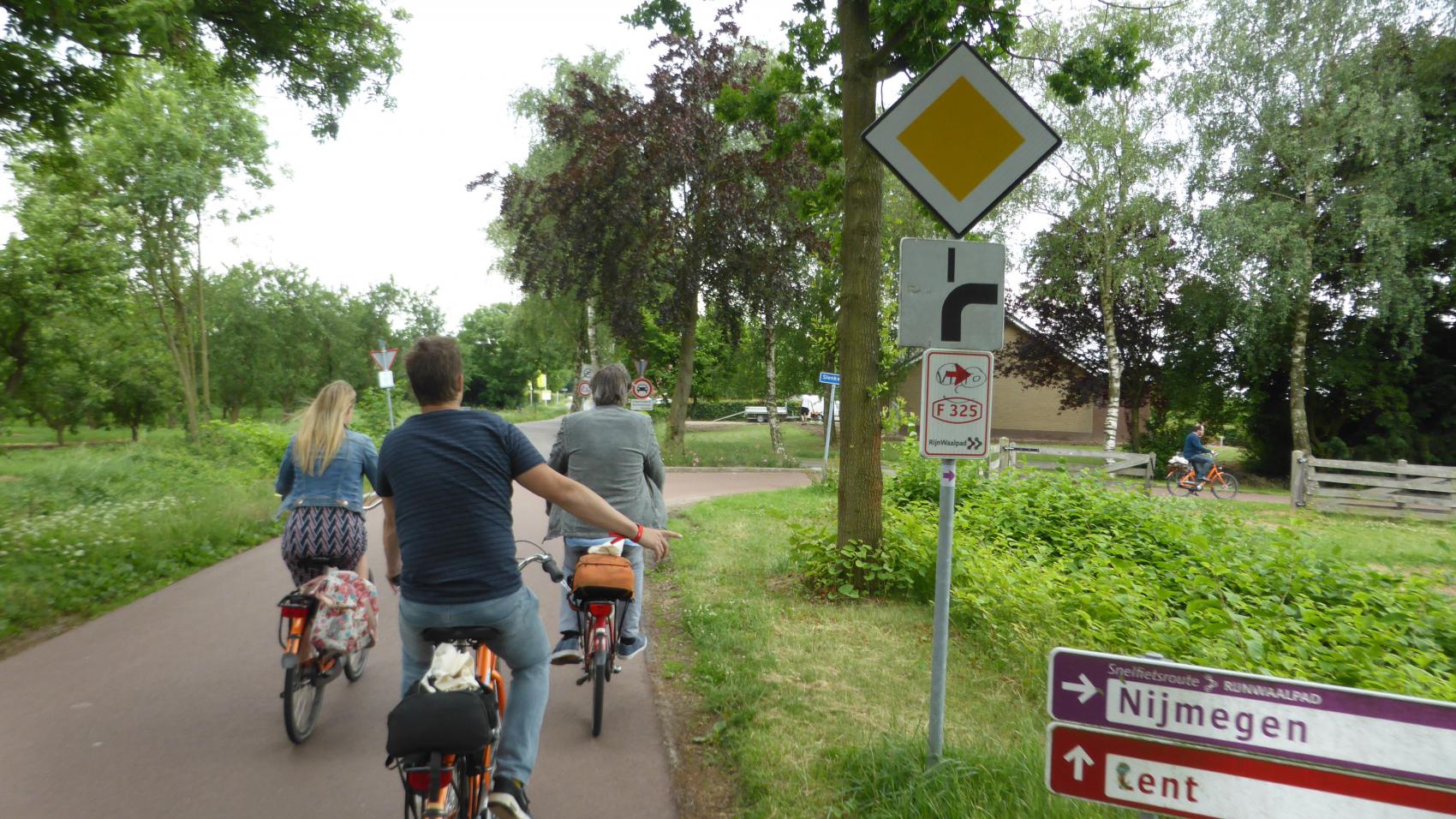 The green trace along the RijnWaalpad shows that cyclist are willing to take a detour in their daily trips to use the cycle highway. Source: www.bikeprint.nl. 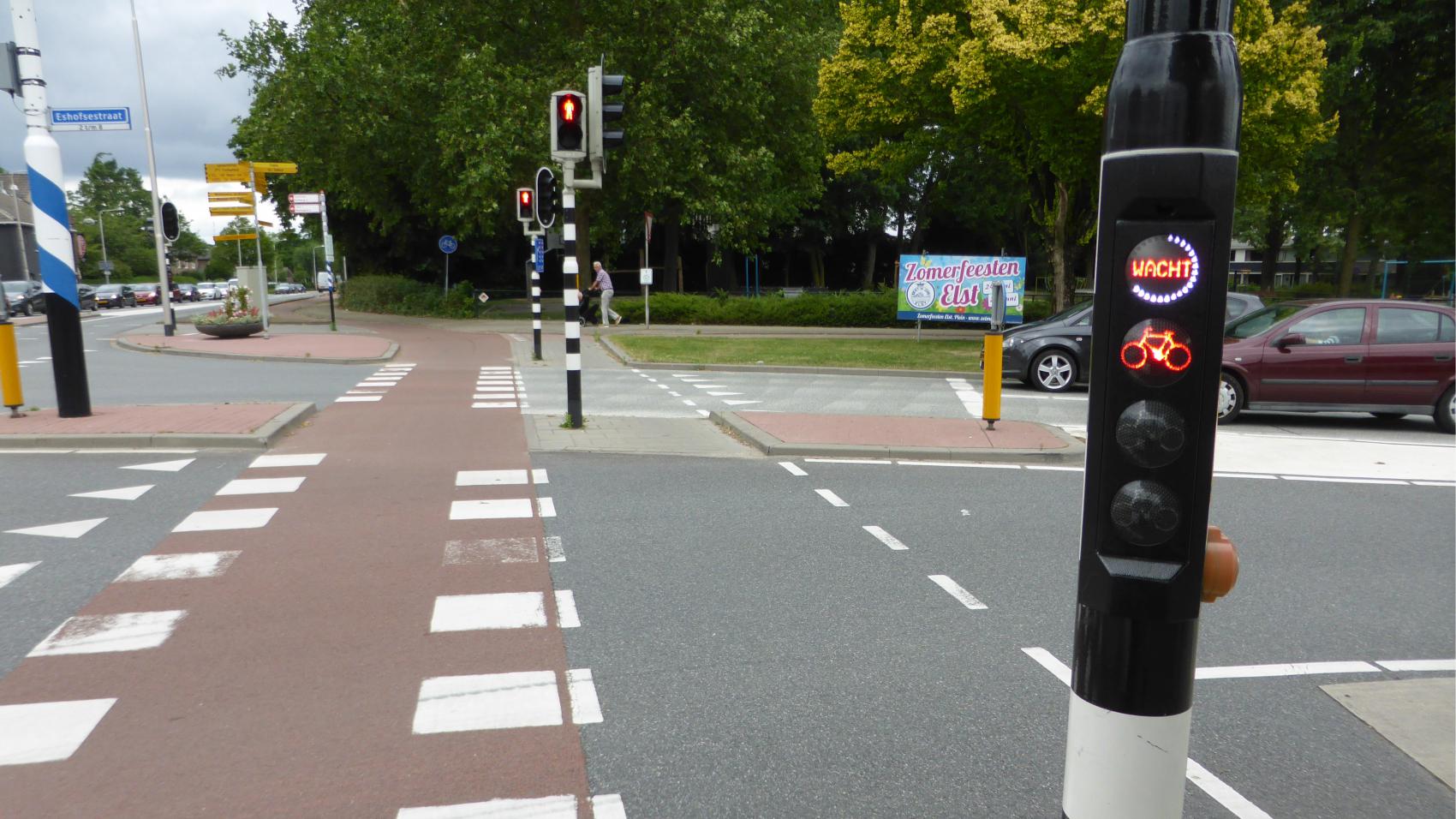 The alternative route through Elst also meets Dutch high standards of quality, but unlike the cycle highway involves some waiting on traffic lights

The article is a part of a series showcasing examples of best practice implemented by the CHIPS project partners on cycle highways in North-Western Europe. In the next part we will return to RijnWaalpad to take a closer look at the tunnels built to cross busier roads.