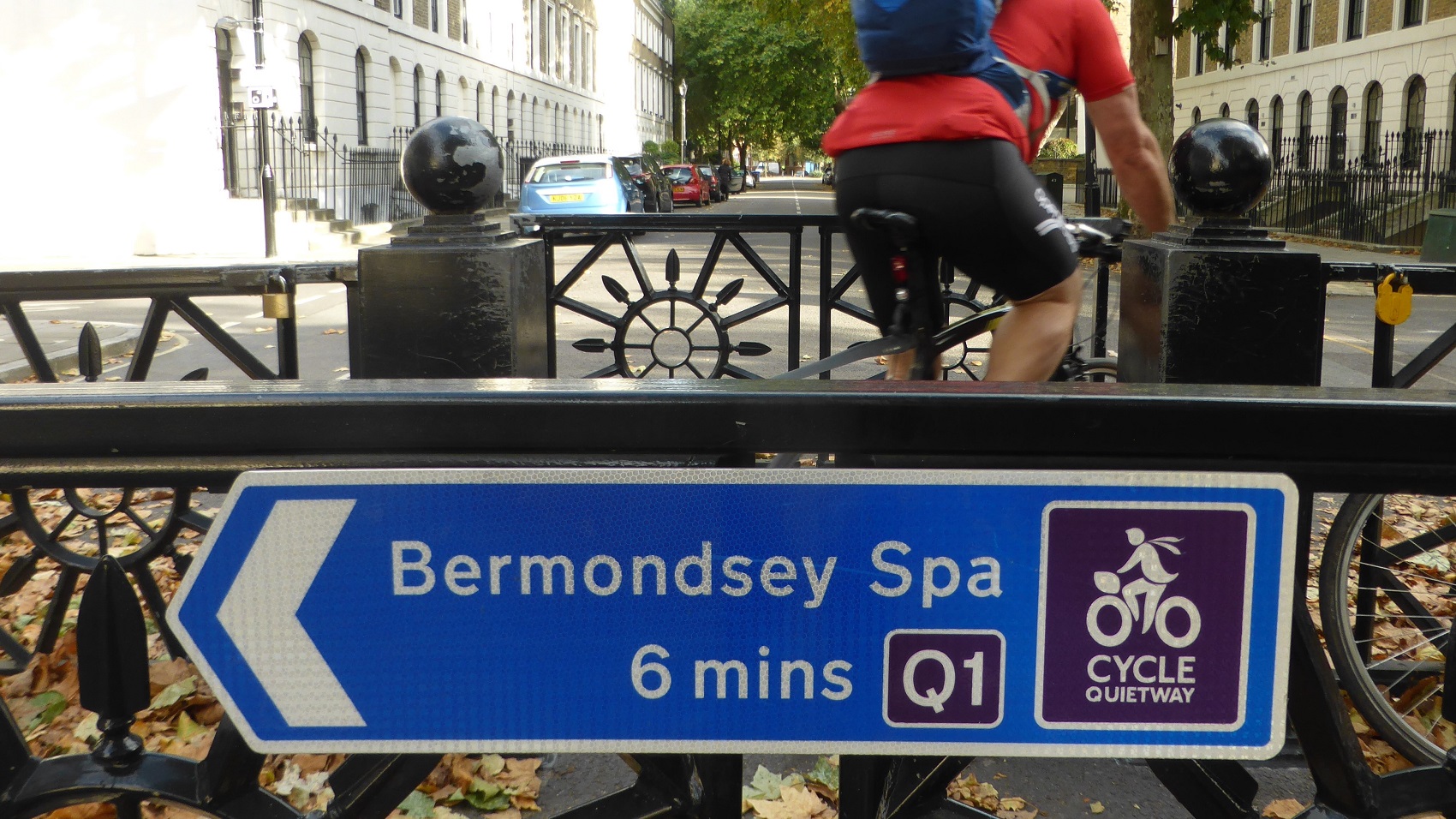 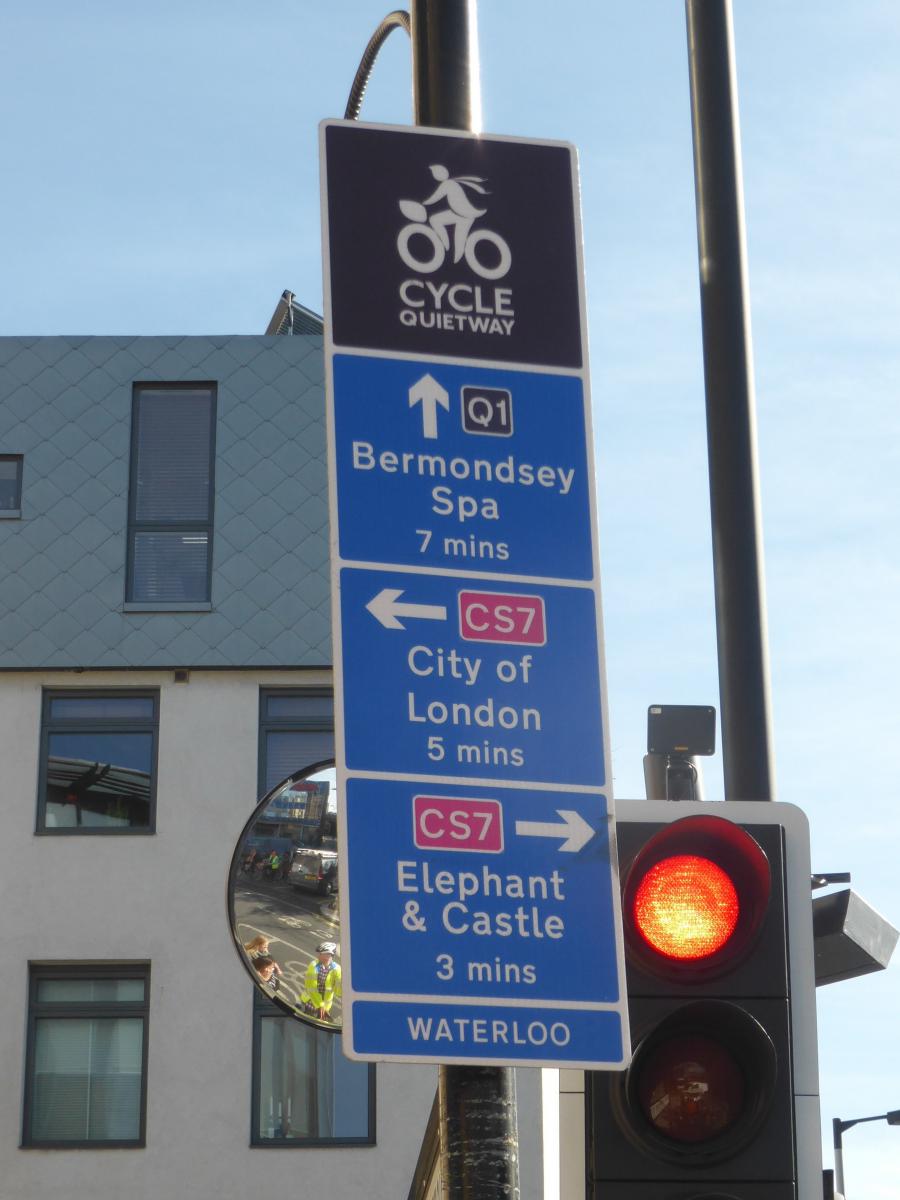 Signing of quietways (Q) is integrated with signing of superhighways (CS).

Quietways are a new concept in London, complementary to cycle superhighways. While superhighways often follow the main roads with separated cycle paths to provide the fastest and most direct route, quietways lead through residential streets, making use of ‘filtered permeability’, with only short connecting stretches of dedicated cycle infrastructure where necessary.

Quietways are continuous and convenient cycle routes on less busy backstreets across London. The principle of filtered permeability is pivotal for quietway planning. Cars are “filtered out” by banning motor vehicles from strategically located short sections of local streets, while cyclists are allowed to pass through. This approach maintains the area accessible by car (for residents, deliveries, services…) and at the same time keeps the through traffic away, therefore letting the residential road stay quiet and suitable for cycling even for beginner cyclists.

If a quietway briefly joins a busy road, it is segregated from motor traffic. Sections of quietways might also make use of greenways across parks or along waterways, and new bridges where required (e.g. at Valentines Park on Quietway 6).

11 first quietways have been planned and 2 of them are already completed. Quietway 1 (South) connects Greenwich with Waterloo, Quietway 2 – Walthamstow to Bloomsbury. Quietway 1 increased cycle flows on the route from 650 to 900 in the morning peak (7 am to 10 am). The levels of usage are generally lower than on cycle superhighways, but the scale of investments was lower as well.

In other countries cycle highways often mix different solutions on one route. E.g. RijnWaalpad between Arnhem and Nijmegen includes 4,5 km of cycle path along a motorway, a two-kilometre long cycling bridge, as well as several “bicycle streets” (which could be considered quietways). Clear distinction between ‘cycle superhighways’ and ‘quietways’ is specific to London. It can be traced to “The Mayor’s Vision for Cycling in London” published in 2013, which stated: “We will offer two clear kinds of branded route: high capacity Superhighways, mostly on main roads, for fast commuters, and slightly slower but still direct Quietways on pleasant, low-traffic side streets for those wanting a more relaxed journey." 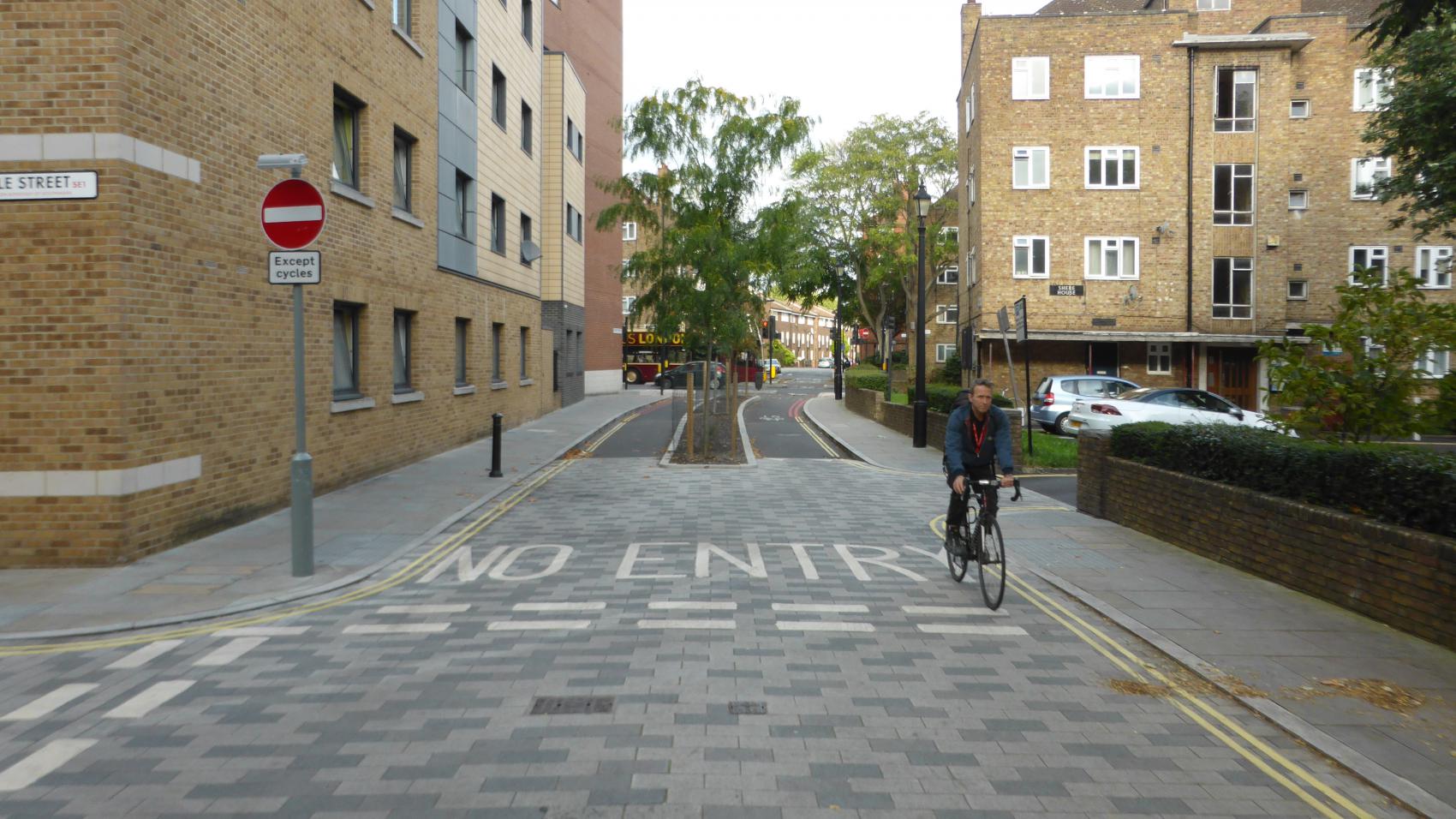 Quietway 1: a section of Globe Street between Cole St. and Greater Dover St. is closed for cars, but open for bikes. 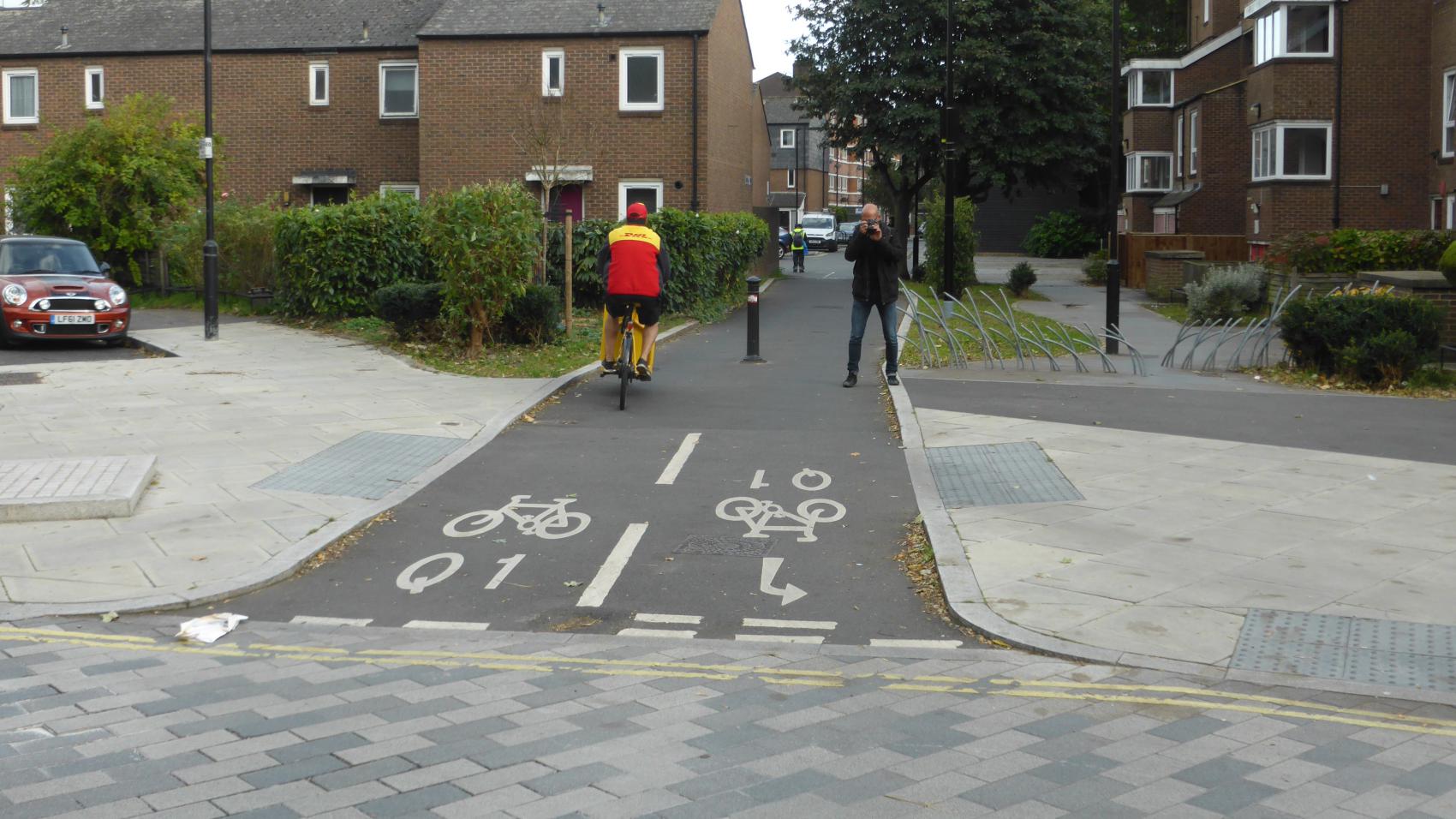 Quietway 1: Rothsay Street is a dead end for cars, but a cycling path connects it to the crossing of Law and Weston St. 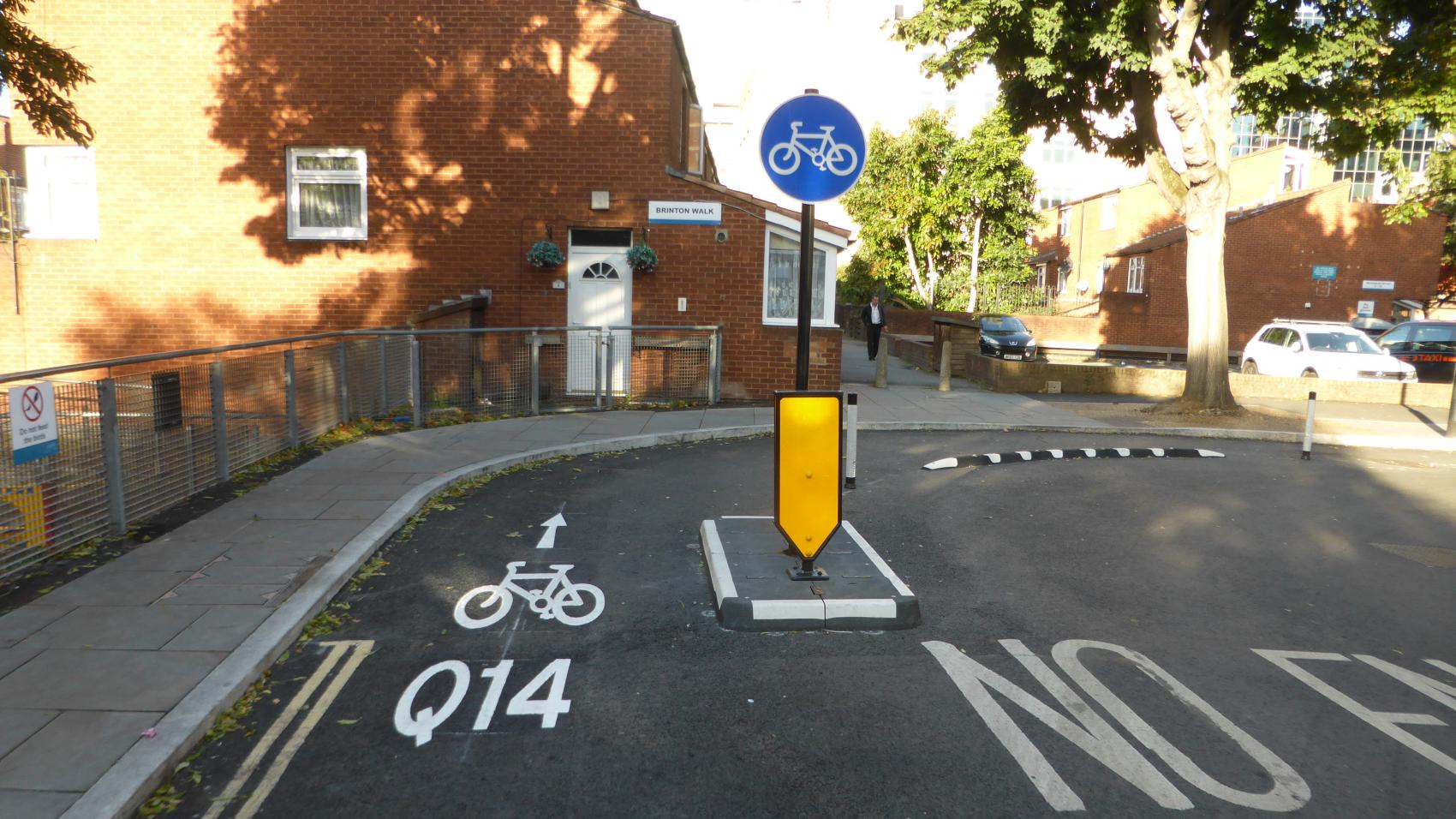 Quietway 14 (under development): light segregation of contraflow cycling on Dolben and Chancel St.