F1 – cycling on a highway along a railroad line 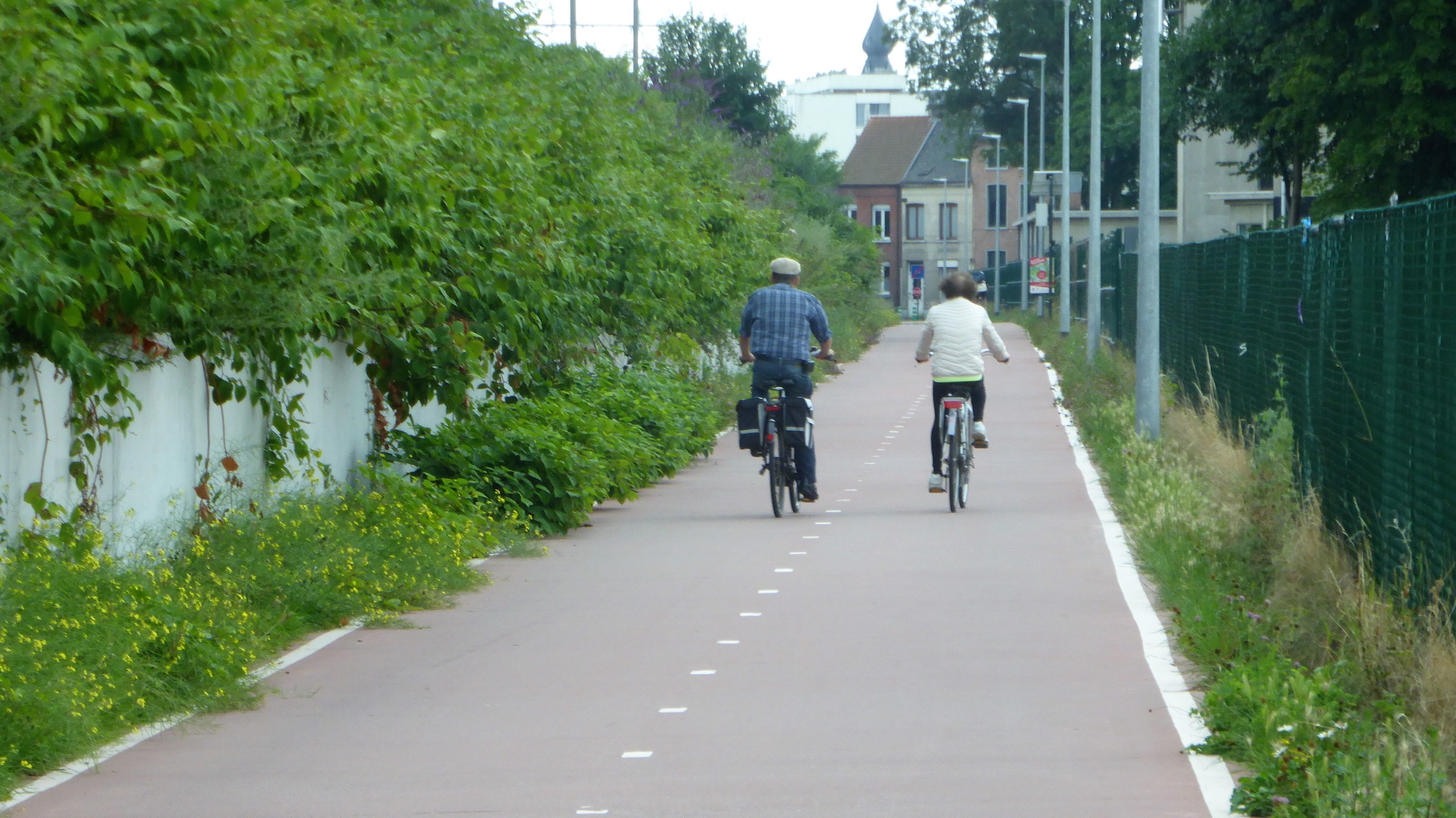 Cycle highway F1 is an example of utilising the potential of rail corridor for high-quality cycling route. Following the railroad line between Antwerp and Mechelen, F1 offers a direct and attractive connection between municipalities along the line.

Direct route increases the outreach of cycle highway: the shorter the route, the more likely is a potential user to choose bicycle for daily commuting.  The cycle highway F1 between Antwerp and Mechelen follows the railroad line, including the high-speed line Amsterdam – Brussels. As the high-speed trains require large curve radii, the line is very direct. Although the cycle highway makes a few extra turns and detours (for example to pass from one side of the tracks to the other), it is still only 8% longer than the distance as the crow flies.  It is also 13% shorter than distance by car.

The idea of the Antwerp – Mechelen cycle highway started around the year 2000 with a 300-metre long stretch of cycling path along the rail tracks connecting local streets Roderveldlaan and Bloemenlei in Mortsel. This shortcut became very popular. It motivated the province of Antwerp to extend the path from a demonstration project to a cycle highway, and leaded to a continuous route between Antwerp and Mechelen. Currently, on an average workday, more than 4 000 people cycle the most popular sections, up to 4 810 cyclists a day near the Mortsel Oude God station.

F1 is still being improved, as well as extended in the direction of Brussels.  Older stretches of cycle paths are reconstructed to meet the standard of cycle highway. An important part of the upgrade process is reduction in the number of interruptions. As a part of the study “priority for cyclists”, carried out by Fietsberaad Vlaanderen (Flemish Cycle Council) in co-operation with Mortsel municipality and the Province of Antwerp, priority arrangements were changed on several crossings (in a way similar to RijnWaalpad) to give right of way to the cycle highway.  A new cycling bridge is under construction along the railroad tracks over a busy crossing just next to (and partially even through) the Antwerp Berchem train station to eliminate the need of waiting on traffic lights. 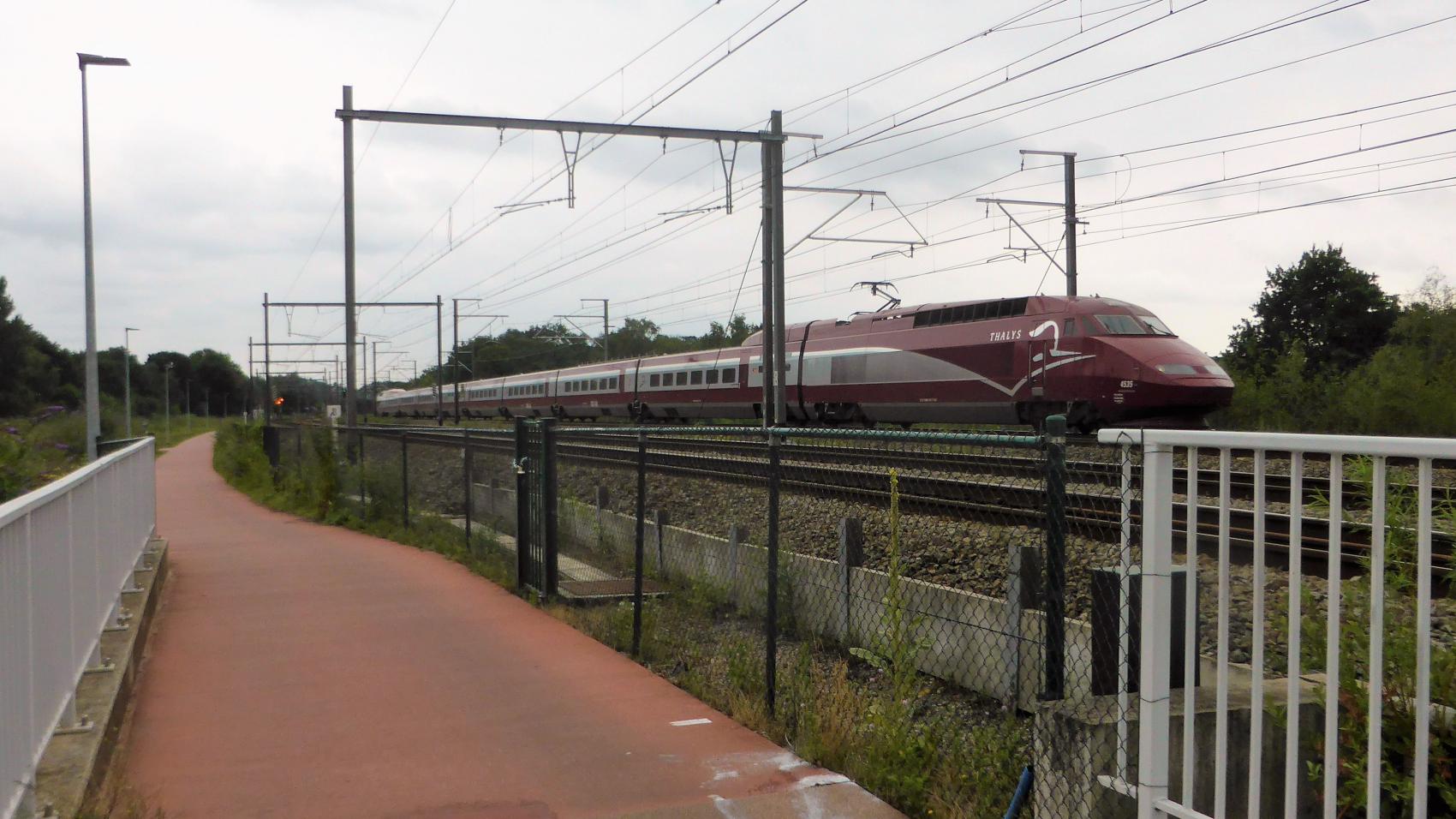 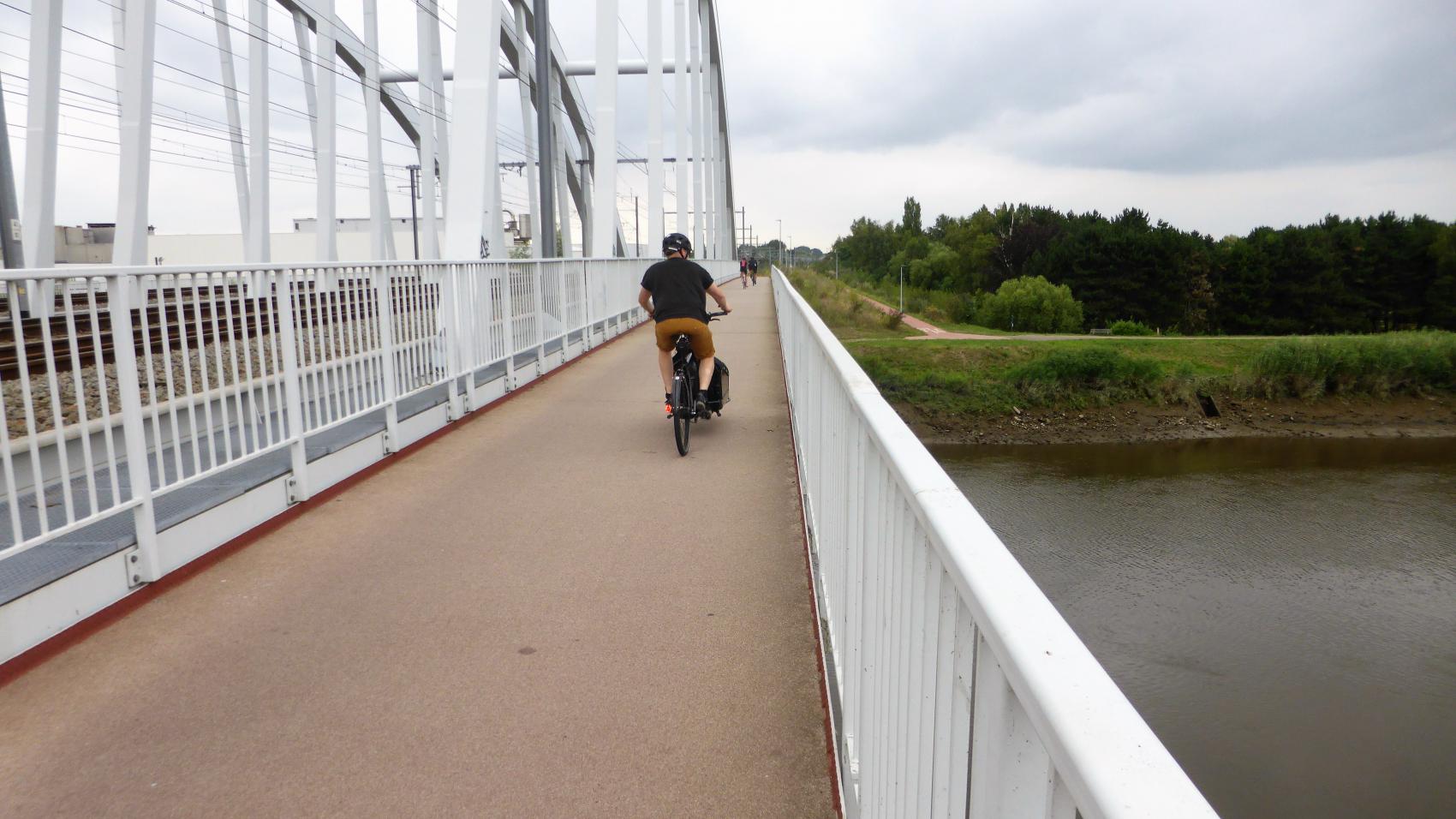 Reconstruction of the rail bridge over the river Nete in 2015 included adding a cycle bridge next to it. 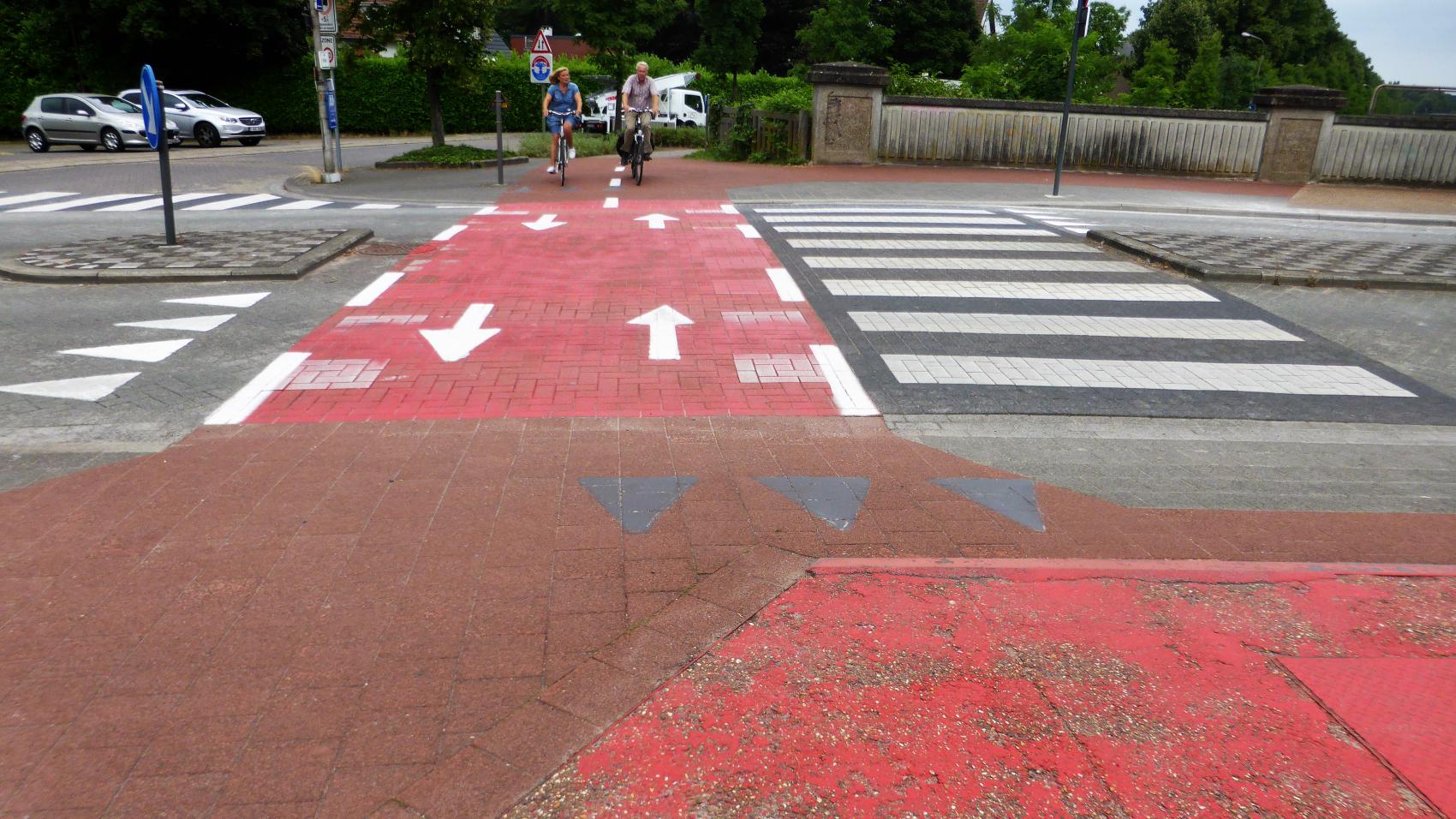 Recently changed priority on the crossing with Deurnestraat in Mortsel. In the past cyclists crossing the carriageway had to give way, now the cycle highway has priority. Old horizontal signs (“shark teeth”) still visible, but greyed out. 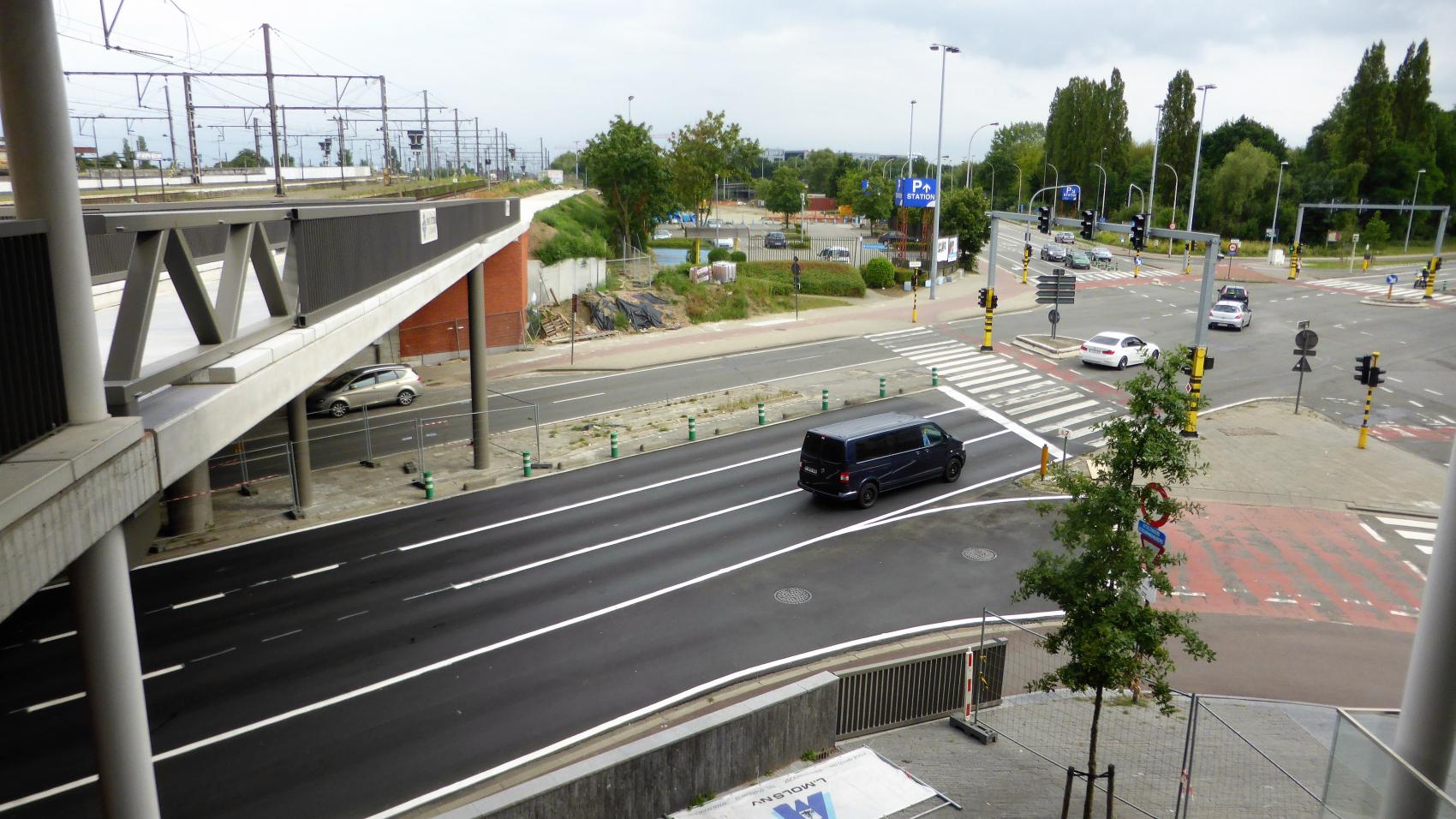 New bridge under construction next to rail bridge (left) over the R10 road to allow cyclists to bypass traffic lights (right) and reduce the number of interruptions on the cycle highway.

The cycle highway continues along the historical railway embankment into the centre of Antwerp. On an average workday 4 219 cyclists use this section.