The CHIPS project (Cycle Highways Innovation for smarter People transport and Spatial planning) financed by Interreg North-West Europe has been 3 years of knowledge sharing and research between  partners from Belgium, the Netherlands, Germany, UK and Denmark. Selected results of the project were presented in a dedicated Velo-city session.

Sofie Pues, communications expert in the Province of Flemish Brabant (Belgium), started with a recipe for building a strong mobility product – how to glue different pieces of cycling infrastructure by branding and wayfinding elements. She gave some general tips based on the experience from Flanders, Copenhagen and the Netherlands: “network level branding allows economy of scale; the logo needs to be compact, versatile and have a high contrast brand-colour”, invited to explore the readability toolbox for examples of practical applications, and to add more from other countries and regions: “We are always looking for new ideas.”

Tina Caers, Cycle Policy team leader in the neighbouring Province of Antwerp, presented the results of a detailed investigation on the lateral 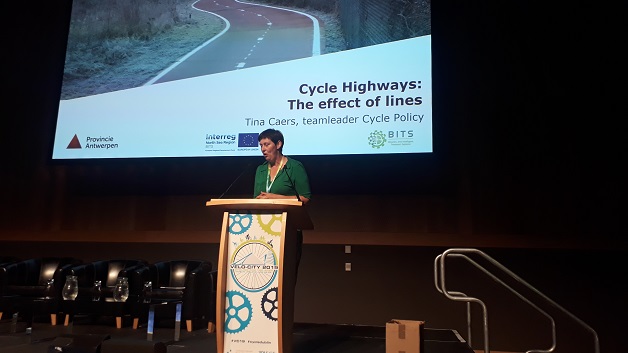 position of cyclists on the cycle path performed on the cycle highway F1 Antwerp – Brussels. Cyclists’ position and speed was measured with the help of 4 pneumatic tubes, in relation to the type of location (straight / curve), width of the path and type of horizontal markings (edge / median / both) applied. “If you want cyclists to stick to the right side of the path, median line really helps” – recommended Tina – “And edge markings reduce the risk of running off the road, and therefore single vehicle accidents”.

“How do we know whether users like the cycle infrastructure we build?” – asked Lisette Hoeke, project coordinator and researcher at the Breda University of Applied Science (Netherlands). Some of the answers included video footage, measurements such as heart rate and skin conductivity (to determine stress level), and interviews. She demonstrated how a new wayfinding system installed on the F261 cycle highway Tilburg – Waalwijk in the Netherlands substantially improved the user experience.

Anna Garrett, Project Manager at the Office for Cycle Superhighways in Copenhagen, presented the key numbers from the comprehensive evaluation of their network. The volume of cyclists increased on average by 23%; 14% of new users come to cycle highways from their cars; the average length of a trip on cycle highway is as high as 11 km; and on an average day 400,000 km are cycled on “supercykelstiers” in Copenhagen – “that is equivalent to 10 times around the world”, she concluded.

Aleksander Buczyński, the ECF Infrastructure Officer, demonstrated an example of a long-term, EU-wide result of the CHIPS project. The case

studies gathered during the project on one side motivated ECF to lobby for the inclusion of cyclists in the EU directive on Road Infrastructure Safety Management, and on the other provided evidence that helped to convince the decision-makers. The revision of the directive, adopted this year, included an obligation to take into account the needs of cyclists in major road investments.

In the discussion, the attention was drawn to a game-changing effect of cycle highways, especially in connection with e-bikes – expanding the range of daily cycling from core urban areas to suburbs or neighbouring towns. This requires a new organisational approach, making cycling a regional rather than municipal issue, but also raises support for cycling infrastructure in area previously heavily dependent on cars.

Only very selected results could be presented in one-hour session. Therefore, Niccolo Panozzo, the ECF Director of Communications finished with an invitation to explore the brand new Cycle Highway Manual, available at cyclehighways.eu.  It deals with cycle highways from the stage of planning through design, construction, selling and maintenance to monitoring and evaluation.