Due to climate change, many Western European countries now expect to face more frequent periods of heavy rain or drought. Nowadays, in the Netherlands, most cities still collect the wastewater and stormwater in one combined wastewater system. When more rain falls than can be stored in the sewer system, the sewer system may occasionally overflow. The diluted sewage water could then leak into the surface water, thus polluting it. This may lead to environmental issues, like fish mortality, pollution of the sludge and eventually diseases in the cattle who drink the surface water. Besides these environmental issues, public health can be at risk due to the pollution of recreational waters. Bacteria grow exponentially, especially in warmer temperatures, which could cause a faster spread of unhealthy blue-green algae.

Among other reasons, Hoogheemraadschap Delfland (the regional water board in the southwest Netherlands) would like to have more insight into the water quality and quantity, as well as the potential impact of its sewer systems on the surface water.

The stakeholders of the SWWIM (Smart Wastewater Information Management) pilot joined Netwerk Afvalwaterketen Delfland, a network organisation, where they work together to improve the wastewater system. This network organisation consists of several municipalities, as well as two drinking water companies and the water board. All stakeholders are responsible for a part of the water system and so are all connected. The pilot, which is part of the European project BE-GOOD, deals with complex issues like water overflowing by using and evaluating open data. Opening up data has already proven to be fundamental for innovation and the development of new ideas. Data has the power to transform the way governments, planners, developers, owners and operators manage their work. Data sharing is not just a logical solution, it has also become a legal obligation. It is not a question of if you share data, but when and how. Consequently, sharing data leads to more insights in greater detail, which could help prevent water issues.

However, data from a single source does not give a complete overview. Water management involves many different partners and therefore many different sources of data. To combine the wastewater data and information of individual partners like Delfland, a platform will be developed by the company HydroLogic to optimise (waste)water management. The platform will incorporate both static and dynamic data to gain more insight into the water infrastructure and its bottlenecks, but also in the way the complex systems work together and how they influence each other. In this way, it will be more clear which measurements can be taken to improve the system and potentially prevent future water damage.

The platform is currently in the development phase and includes two municipalities within the Delfland region. After realisation, the next step will be to involve all the other municipalities within the Delfland region. However, it’s not only this region that needs improved data sharing. When successful, the platform could be used by other regions in both the Netherlands and the rest of Europe, thanks to the use of the INSPIRE guidelines (INSPIRE aims to create a European Union spatial data infrastructure). 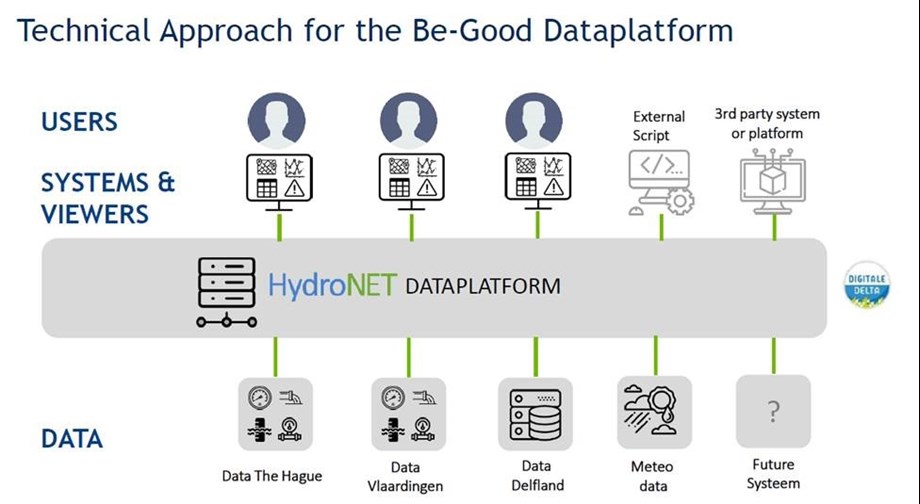 As an example of the international potential to expand, Delfland in the Netherlands and VMM (the Flanders Environment Agency) in Belgium are already sharing water flow data. The two BE-GOOD partners face comparable challenges regarding water tracing, which is why BE-GOOD helps them to share experiences. The VMM wastewater tracing challenge is a tracing algorithm combined with more detailed digital data on the path wastewater follows and which areas are at risk due to polluted water from an overflow. Due to similar challenges, Delfland will not only test its platform with VMM’s data, but VMM will also test their tracing algorithm with Delfland’s data. A generic water infrastructure ecosystem based on data will not just lead to resolving current problems such as the sewer system overflowing, it might also provide completely new insights and findings.